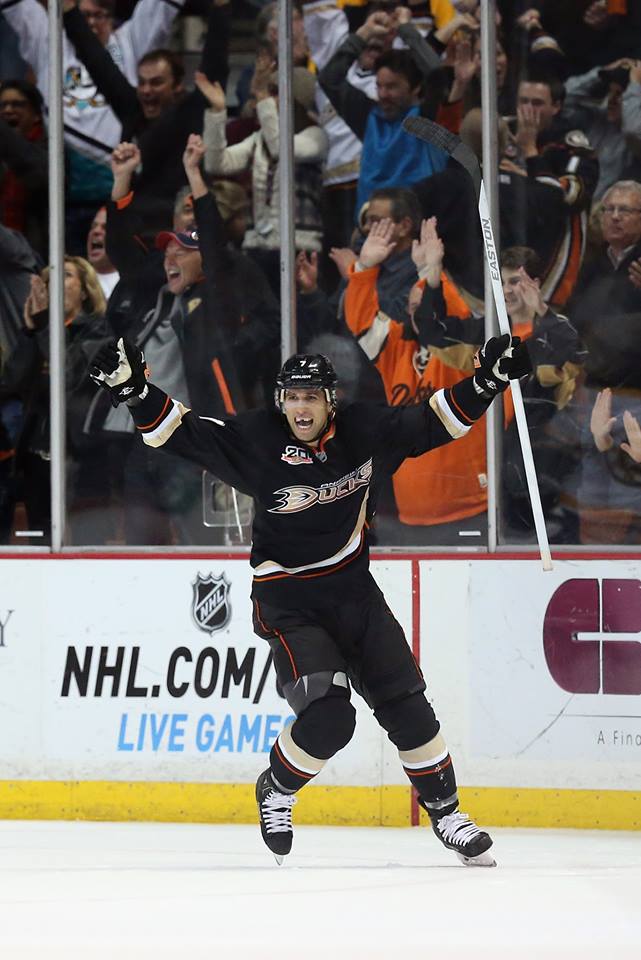 ANAHEIM—An early rush for the lead ended with a show of strength late in the game, ending in victory. The Ducks scored four of their five goals on Boston on power plays to hold the Bruins 5-2, at the Honda Center Tuesday night.

With Boston holding a strong clinch in the Atlantic Division, their way of making headlines out west was to bring down the best. With Anaheim’s recent dominance over Vancouver on Sunday, the task would prove harder to accomplish. Showing no intimidation coming into the game, Boston came out strong, shooting 16 shots on Anaheim netminder Jonas Hiller with no success. The Ducks took just three shots in the first period as their time to combine their offense was yet to come.

Little effort came out of their end as the team was rewarded with their first power play near the five-minute mark of the second. Mathieu Perreault got the puck rolling with a wrist shot counting for his eighth of the season onBoston goalie Tuukka Rask who allowed one goal against Winnipeg on Saturday. It wouldn’t be the last one he would see go behind him as Corey Perry scored in his second straight game on a wrister in front of the Boston crease for his 24th on the year. Anaheim made the goal possible holding Boston’s attempt to clear the puck, giving Perry the time to take point on the glove side of Rask.

The team’s third goal came while shorthanded with Andrew Cogliano scoring his fourteenth, giving him three goals and four points in the last four games. Frustration kicked in on the Boston side, as defenseman Adam McQuaid challenged Patrick Maroon to a fist fight, leaving the Bruins scared, and the period ended four on four. Before the period could come to a close, Daniel Paille made a response for the Bruins with a sweeping backhander that left the glove side of the net open, giving Paille his seventh of the year. The Ducks took nine shots to Boston’s seven, with little effort from the home team as the Boston penalties were becoming their downfall.

The third period was a better showing from Boston, as they began to construct offensive plays, leading to a closer attempt at making it a game. Dougie Hamilton scored his fourth on a drive that began as a scramble for the puck that led to its clearing and Hamilton open for a shot through traffic.Boston gave one final power play to the Ducks which they connected, with Nick Bonino scoring in his second straight game. Anaheim successfully scored in three of three on the power play. With two-and-a-half minutes to play, Perreault scored his second of the night, snapping the puck high on the slot to comfortably put his team ahead by three.

The Ducks win snapped Boston’s two-game streak, leaving Rask to add another loss to his now double-digit record. The Slovakian made only 15 saves, becoming the second lowest total seen by Rask all season. Hiller was rewarded with his 21st, making 30 saves on the night, moving him into a tie with Rask for fourth in most wins this season by a goaltender. Anaheim takes off against Nashville and Phoenix before hosting Detroit at home Sunday night.