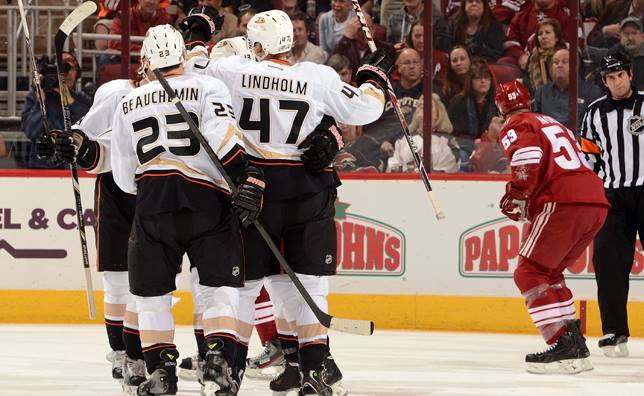 GLENDALE—The Ducks winning streak was a force no one could stop.Anaheim went on a run through the second period to defeat the Phoenix Coyotes 5-3 at the Jobing.com Arena Saturday. The team is on a six game streak going 16-1-0 in their last 17 matches.

After a rough loss to Minnesota on Thursday, the team’s final homestand before hitting the road came against the league’s hottest team who found a way to win on the road defeating Nashville two nights ago. The one shining light was the home advantage Phoenix carried the lead in the first period. Coyotes left winger Lauri Korpikoski put his team ahead on a spinning shot in front of Ducks netminder Jonas Hiller for his seventh of the season and it was the last time Phoenix would see the back of the net for a time.

After nine minutes of battling for a grip on puck possession, the Ducks evened the game at 12:27 where Hampus Lindholm scored his fourth on a wrister from the stick side faceoff circle in the Phoenix zone after the team recovered on two rebounds to make the third count. The Ducks led shots on net 15-12 and would find their time to come soon approaching.

Second year defenseman Sami Vatanen gave Anaheim the lead five minutes into the second period on a drive past the glove of Thomas Greiss who saw action for the first time in four days. His night would only get worse as the Ducks lead grew as fast as their recent success. Dustin Penner scored his 11th on a shot that zipped over the shoulder of Greiss to give the former LA King his first since December 15.

At the midpoint of the game, Anaheim captain Ryan Getzlaf scored a backhander after the team patiently waited for the moment where Getzlaf pulled off the shot that bounced off some skates in the crease to record his 23rd of the year. Phoenix made the decision to pull Greiss from the net giving Mike Smith the chance to save the game. The Ducks managed only 10 shots after the Coyotes change in net for the period, while holding the Coyotes to eight. With the three goal margin in their hands, a sure sight of victory could be assured.

The Coyotes desperately trying to figure things out continued to struggle into the third, as tensions grew putting the Ducks on their third power play where Lindholm scored his second with 20 seconds left on the man advantage. The goal was barely seen as Lindholm’s high shot on the slot went in and giving referees a moment to confer what they actually saw. It was quickly determined to be a good goal putting the margin out of reach.

The Coyotes didn’t enjoy being manhandled on their own ice leading Coyotes defenseman Rostislav Klesla to have it out with Anaheim’s Patrick Maroon earning each player a fighting major. The fight put the life back into the Coyotes as Martin Hanzal countered on a huge 5 on 3 chance midway into the third giving Hanzal an open wrist shot for his 13th. It was the only time they would find leniency from their adversaries. With two minutes left, the Coyotes pulled Smith from net giving the team a sixth man to make what could have been the biggest comeback of the year. Mike Ribeiro got the puck rolling on a wrist shot from the crease that gave him his 11th.

Ribeiro’s goal was all Phoenix would see as time beat them to the chase giving Anaheim a lot to celebrate. The victory not only sealed the second time this season that the Ducks held six straight wins, but a certain goaltender had a bigger streak on lock. Hiller’s 28 saves on the net led to his 13th consecutive win in the net, which puts him four back of the record set by Gilles Gilbert of the Boston Bruins back in the 1975-76 seasons. Gilbert had 17 straight wins by a goaltender. Hiller’s next challenge comes against the Detroit Red Wings who look to end a three game sweep out west with a second victory.