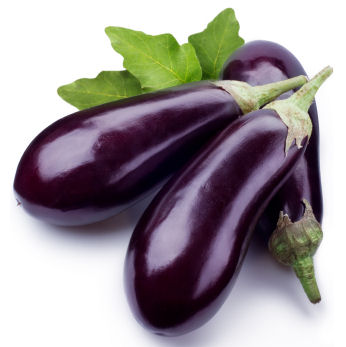 UNITED STATES—Some veggies are easy to comprise a dish with, others not so much.  One vegetable that may be a question mark for many cooks is eggplant. It has an oblong shape, it’s a dark purple and has a texture that may frighten some on first glance. Hey, bet you didn’t know that the eggplant is related to the tomato and the potato.  This is a veggie like so many others that can come in various sizes from small to very large.

Eggplant is considered to be a veggie, by most Americans, but surprise it’s actually considered a fruit.  The bitter taste may explain the reasoning why it sits alongside the rest of many veggies. Similar to bananas and apples, upon slicing, eggplant will quickly turn colors; from a white flesh to brown. Cooking tip: to prevent the browning of certain fruits or veggies use some sprinkles of lemon or lime juice.  Why do you ask? Well the acid in the juice prevents oxidization of certain fruits and veggies that brown after being sliced.

This vegetable is low in fat, carbs and protein, but makes up for those things with abundant amounts of phosphorous, potassium, and folate. Eggplant has been known to have a variety of health benefits to the body that include lowering cholesterol levels and having an adverse effect on weight loss. Eggplant is bitter, so it’s important to leisurely salt the veggie and to cook thoroughly to eliminate that bitterness that has been a turnoff to so many from cooking this versatile treat. Of course, we’ve all heard of the popular Italian dish eggplant parmesan (substitute chicken for eggplant), but I want to take the dish to new heights.

For a quick and easy dish to get the taste buds watering, utilize eggplant in a bruschetta appetizer as I learned from Chef Aaron McCargo from the series “Big Daddy’s House.”  Dice eggplant into small cubes, dice tomatoes into small cubes, fresh mozzarella, basil, pepper, salt and a crusty bread, either foccacia or ciabetta works best in my opinion, and you’ll have a treat everyone will be talking about for days.