UNITED STATES—Authorities arrested Marc Gomez, 36, for attacking an elderly woman on a New York City subway on March 10. Officials from the New York Police Department had been searching for the suspect for over two weeks, after video footage of the incident was captured on a cell phone.

Shocking footage shows the moment man brutally kicks and punches defenseless woman, 78, in the face and head on #NYC subway.—————-Police are looking for a man who repeatedly punched and kicked an elderly woman in the face and body in an unprovoked attack on a #Bronx subway line in #NewYork —————-Horrific footage of the incident shows the man assaulting the 78-year-old victim as she is sitting on a northbound No.2 train at around 3 am on March 10. —————-The woman, who was alone, tries to defend herself as he continues to attack her while other passengers record the incident and do nothing to help?—————–@video2fone#video2fone

The assault occurred at 3:10 a.m inside the 238th St/Nereid Ave subway station in the Bronx. The video which was broadcasted on social media shows Gomez repeatedly kicking the 78-year-old female passenger in the head and face as she was seated. The victim attempted to ward off the blows by her attacker. Other riders can be seen in the background, but did not attempt to help the victim.

Gomez got off the train at 238th Street and fled on foot, as the victim tended to injuries she sustained. The Metropolitan Transportation Authority(MTA) released a statement on condemning the attack which read: “This is an extremely disturbing video. Nothing is more important than the safety and security of our customers, and we strongly condemn this despicable attack.” 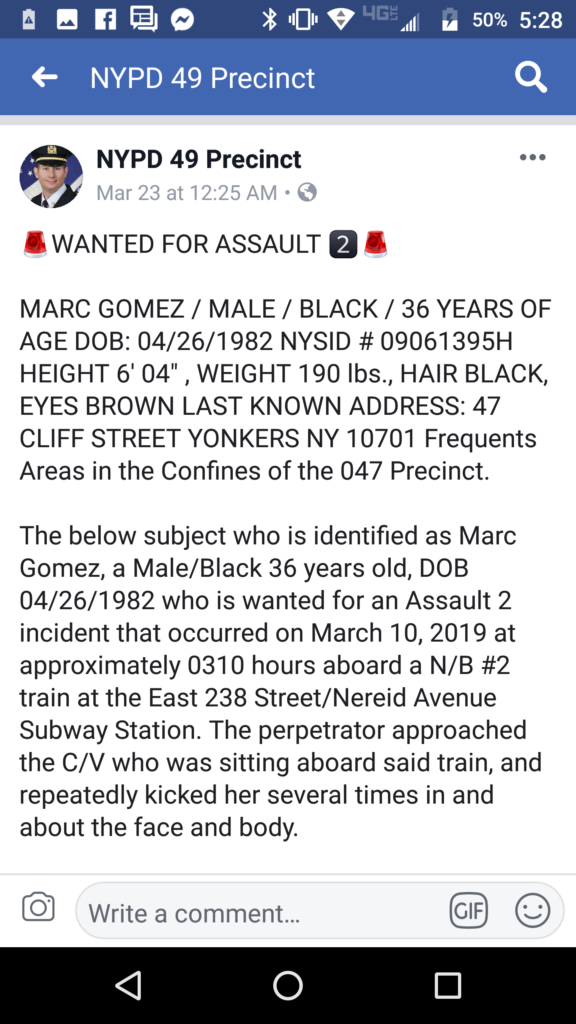 Gomez was charged for harassment and assault. The victim sustained swelling and bleeding to her face. She was taken to a local hospital where she was treated.