UNITED STATES−There are multiple states where official results for the General Election on November 3 has not been reported.

The state of Arizona was been won by Republicans in 2008 for Senator John McCain, by Mitt Romney in 2012 and President Donald Trump in 2016.

Michigan voted for President Trump in 2016 and for Barack Obama in 2008 and 2012. Nearly the entire state is depicted red, but it is recorded as a Biden win with a large majority of the population of the state located in the southeastern region.

A rough count of approximately 73 counties voted for President Trump while Marquette county shows a Biden win with 20,465 votes or 54.6 percent and 16,288 votes for Trump or 43.5 percent. 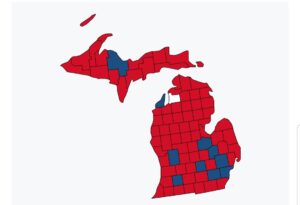 President Trump won Wisconsin in 2016. Former President Barack Obama won the state in 2008 and 2012. Fourteen counties were victories for Biden. The remaining counties (approximately 70 in all) in Wisconsin were won by Trump.

Some states reported that they stopped counting at approximately 10:00 p.m. on November 3, while others counted through the night. More obtained help in counting by the Army National Guard.

Biden spoke publicly on November 4, announcing his expectations to win if he reaches 270 electoral votes. The Trump campaign is ready to file claims of voter fraud that have been alleged in several states.