UNITED STATES—The Federal Drug Administration has issued a voluntary recall for select EpiPen lots after two reports from outside of the U.S. indicated the pens failed to activate.

The recalled products and their lot numbers are listed below: 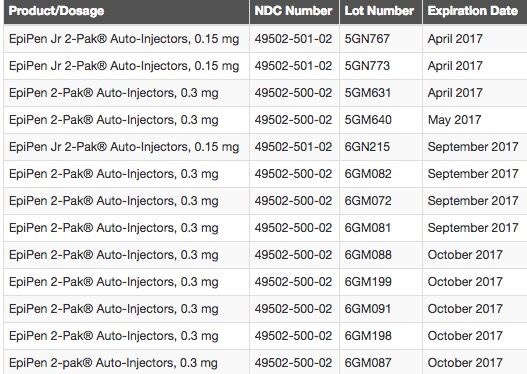 The recall was expanded to the United States after Meridian Medical technologies previously issued the recall across the world, Mylan (the maker of the EpiPen) announced Friday, March 31.

The FDA reported that the activation failure could be the result of a defect in a supplier component. Officials indicated the defect could have harmful, possibly deadly because the EpiPen is used to treat only severe cases of allergic reactions.

The recalled EpiPens were manufactured and distributed between December 2015 to July 2016. Mylan is replacing the recalled products at no additional cost. Based on availability, patients will either receive EpiPen Auto-Injector or its authorized generic.

The recall indicates patients are advised to carry their recalled EpiPens until the replacements are received. Customers and patients can call Stericycle at 877-650-3494 to return the product(s).