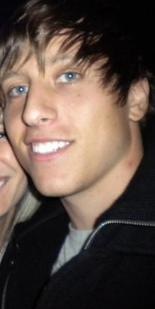 Barker is the main suspect in the murder of Takazato, along with his girlfriend Chei Coggins Johnson.  Johnson is the former girlfriend of the victim and made claims that Takazato had physically abused her, which allegedly enraged Barker to the point of engaging in an attack.  The attack took place on Tuesday, July 20, when Takazato was discovered dead from stab wounds outside his home at the Trousdale Estates in Beverly Hills.

The search for suspects lasted through the night. Later that day police arrested Barker, Johnson and a third suspect.  After the third person was released, the other two individuals were each subsequently charged with a single count of murder.

Barker is from West Springfield and moved to Los Angeles to pursue a new career; he is 23 years old.  Johnson is 20 years old and has a background in gymnastics.  The two had recently begun dating and it is being reported that after Johnson told Barker that her ex-boyfriend Takazato had physically assaulted her, Barker decided to attack the man resulting in the murder. Johnson has also pleaded not guilty to murder charges.

The suspects are being held in lieu of their bail, which was set at $3 million.  They will appear in court on August 26 for the preliminary hearing.

Los Angeles Marathon Rescheduled For May