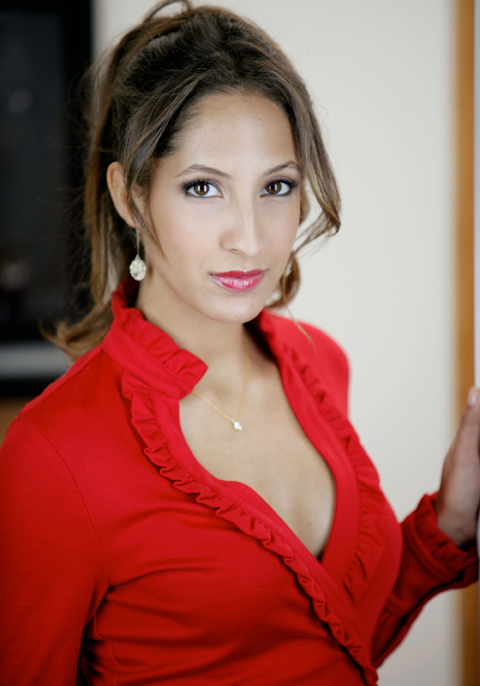 HOLLYWOOD —Hot on the heel’s of their Daytime Emmy nominations. Two stars from the number-one daytime drama CBS’s “The Young and the Restless” spoke exclusively to Canyon News to give readers and fans of the hit show their reactions to the honor of being nominated for television’s most coveted award. Image award winner in 2008, Christel Khalil, and handsome actor Billy Miller are considered wonderful people and brilliant thespians amongst their peers, and are two of “Y&R’s” most popular actors with television viewers and fans. Christel spoke in between feeding and changing her newborn’s diapers, and Billy was half awake during his interview.

“Y&R’s” exotic beauty Christel Khalil, who portrays Lily Winters on the hit soap opera hopes that three times is the charm. Khalil was previously nominated for Outstanding Younger Actress in a Daytime Series in 2004 and again in 2006. Christel and her husband Stephen Hensley just recently welcomed a baby boy named Michael Caden last month, so I whispered when interviewing the star, worried that I”˜d wake up her infant. Asked who notified the star of her nomination for Outstanding Younger Actress, the talented actress smiled then responded, “Tommy, I woke up late because having a new baby I get no sleep. So I woke up with six voicemails and the first one I heard was from [“Y&R” Associate Producer] Josh O’Connell saying congrats and then I heard the rest of them.” When asked if she was excited, the new mother said, “Yes, I was excited. The previous two years I was pre-nominated I knew I wouldn’t be nominated. But this year I wasn’t sure. So to find out I was, was very exciting!”

The toughest part of the pre-nomination process is when an actor’s producers try to choose the best scenes an actor had the previous year to get Academy voting members’ attention. “I submitted the one of Lily finding out she had cancer. I liked it because it had me interacting with so many characters in the scenes,” said Christel. Asked which one of her costars who was not nominated but should have been, Khalil responded quickly, “I think Bryton [Devon] should’ve gotten nominated. He always has such strong work. He’s also very natural.”

Handsome actor Billy Miller who has taken the role of Billy Abbott by storm was still beaming with glee when I interviewed him just hours after he found out he was nominated in the Outstanding Supporting Actor category. Miller joined “Y&R” in 2008 after an acclaimed performance-run on ABC’s “All My Children,” and blowing away critics in an episode of “CSI: NY,” which he guest starred on in 2006. Miller is one of Hollywood’s luckiest actors, because he has the opportunity to work every day with some of the most distinguished and award-winning actors in the industry. From Jess Walton, who plays his character’s mother, Jill Abbott to Emmy-winning actor Peter Bergman who plays his older brother Jack Abbott. The talented actor was a bundle of energy when asked, how he found out he received a nomination for an Emmy. “I was asleep, soundly! After a long night of, well celebrating life, I took the liberty of staying out late only to wake up to my agents calling me at 5 am., Tommy. I answered assuring them that a.) I was not in jail b.) I didn’t do anything more stupid than ordinary, and c.) whatever you heard, it wasn’t me,” states the Emmy nominee Miller. “Then of course they delivered the good news.”

Asking what his initial reaction was, Miller stopped joking and then very seriously said, “Very cool, must admit I am pleasantly surprised and very honored.” Then showing a glimmer of humor in his eyes, Miller reported the next thing he did. “By 9 a.m. I found it odd my mom didn’t call, so I reached out to her. She told me she didn’t think I got a nomination because my name wasn’t announced in the a.m. broadcast on the local news. So, I then delivered the news, at which time she enthusiastically said, that’s great! Goodbye, I have to brag to people now. Then she hung up on me,” Miller concluded.

Both actors are in excellent company with amazing nominees in their categories this year. Though my money is on these two superb actors who are both going to become Hollywood legends in the future. “The Young and the Restless” is also nominated this year for Outstanding Drama Series. “Y&R” received a record 16 nominations this year. The series has been the number-one rated daytime drama for the past 21 years. The show’s Executive Producer and Head Writer is Bel Air resident Maria Arena Bell. The series was created in 1973 by Beverly Hills resident Lee Phillip Bell and her late husband Bill Bell, Sr.