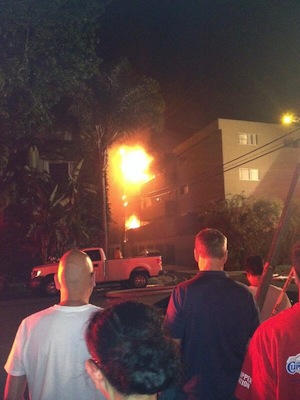 SANTA MONICA-On May 15, a transformer explosion left dozens of Santa Monica residents unable to enter their residence after the explosion left the building red tagged.

The explosion, according to the Santa Monica Police Department occurred around 10 p.m. at the 800 block of Ocean Boulevard. Residents were allowed to move back into their apartments at approximately 5 a.m.

The fire department arrived on scene and took out the fire at around 10:45 p.m. The building was checked for smoke and water, where any disturbances were immediately cleaned by the crew involved in fixing the apartments.

According to authorities, four apartments were damaged in the incident, while one person was left injured. It is currently not known what caused the transformer to explode.