SANTA MONICA—The Metro Expo Line Extension connecting Culver City to Santa Monica is already 90 percent complete and set to open spring 2016. The 6.6-mile corridor will feature seven new stations with three parking facilities offering approximately 570 parking spaces. The line will connect downtown to the beach for the first time in 60 years in a trip that is estimated to take about 46 minutes.

The first phase of the Expo Line began service between Downtown Los Angeles and Culver City in spring 2012. This line carries about 30,000 daily riders. Phase 2 aims to reduce the impact of cars on the environment and aid traffic in LA. It will carry an estimate of 64,000 people by 2030.

The line will allow commuters to take the train “from Grand to the sand,” said Los Angeles Mayor Eric Garcetti.

On Monday, June 29, Garcetti and Los Angeles County Supervisor Mark Ridley-Thomas, along with Los Angeles Councilmembers Mike Bonin and Paul Koretz, attended a train preview of the expo line at Palms Station. The test run was from Westwood to Palms, where the train pulled up for a photo opportunity.

“The Expo Line Phase 2 will offer thousands of riders the option to travel between Downtown LA and Santa Monica without needing a car,” Garcetti said on Monday. “The region’s newest rail line will add another transportation route while relieving traffic and reducing greenhouse gas emission in the process.”

The contractor of the project is Skansa-Rados Joint Venture (SRJV). They have put in more than one million work hours without one lost time incident due to injury, and have made considerable progress in 600 days. More than 3,000 jobs were created for the project, and two thirds of small businesses employed in the project were local. 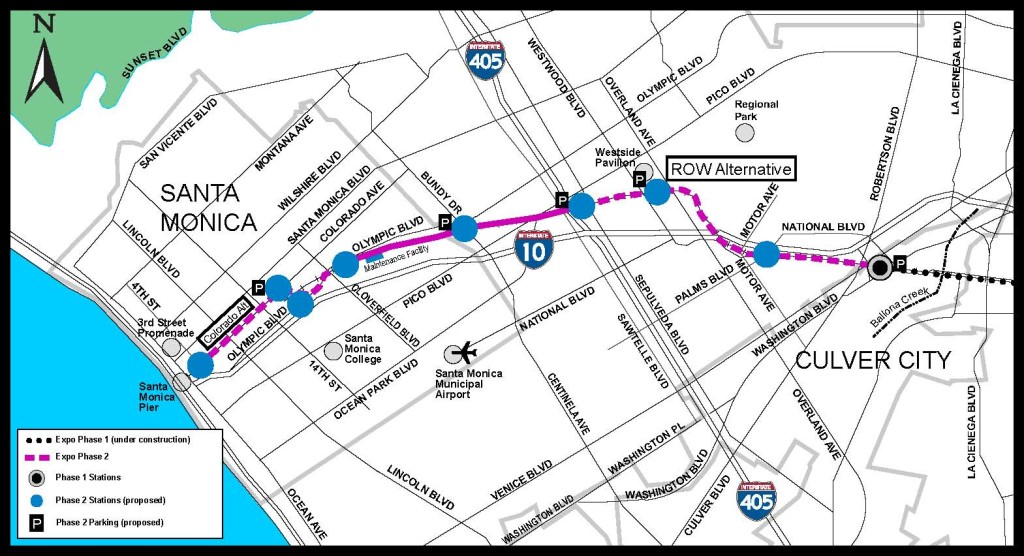