CALIFORNIA—The Office of the Inspector General of the United States Department of Justice has finalized a 2 year investigation into executive members of the Los Angeles FBI who violated standards of ethical conduct.

The six FBI Executive Management members involved in the investigation include:

The FBI members were involved in the investigation conducted for violating FBI ethics policy. According to the complaint filed with The Office Of The Inspector General, the six FBI personnel attended Los Angeles Dodgers games to hold management meetings and participate in law enforcement briefings. Items discussed at weekly management meetings were of classified and confidential nature.

Weekly arrangements were made by Voviette Morgan for executive managers to dine in a buffet in an exclusive area of the stadium for weekly meetings. Executives Delacourt, Moon, and Woolery accepted Morgan’s weekly invitations without FBI knowledge. During the course of the investigation conducted against the Special Agents, The Inspector General found that the executives were offered an exclusive table overlooking the baseball field to discuss confidential information. Dependent on fan capacity, the exclusive area the executives were permitted to dine in were  surrounded by other tables with groups of people who were not FBI personnel.

According to the complaint filed with The Office Of The Inspector General, both using the private table and partaking in the buffet violated federal ethics regulations and FBI policy regarding the acceptance of gifts. The investigation led against the six executive members found that the primary individuals responsible were Voviette Morgan and Paul Delacourt.

FBI procedure makes exceptions for receiving gifts in Section 2635.204 that states “The 20/50 rule.” The 20/50 rule provides an employee the opportunity to accept unsolicited gifts having an aggregate market value of $20 or less per occasion. FBI personnel may not accept more than $50 worth of unsolicited gifts in a calendar year.

In Section 2535.206 of FBI policy and regulations, it is stated that personnel must promptly reimburse the donor of a gift the market value for any entertainment, favor, service, or benefit that exceeds $20. Personnel may not consume alcohol under any circumstances of a gift unless an agent is placed undercover.

During the course of the investigation, the OIG conducted more than 40 interviews and reviewed over 32,000 documents that detailed meeting notes, emails, text messages, and instant messages regarding reserving space at the stadium. On October 11, 2018, Voviette Morgan made arrangements for executive management to spend October 15 at Dodger Stadium for a routine meeting with the following email: 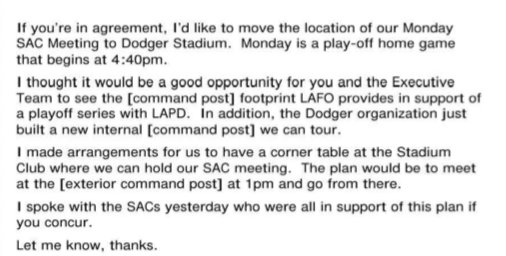 Upper management including the CDC, LAPD, and LAFO were unaware until the morning of October 15 that such meeting would occur during play off season in which Dodger Stadium reaches its capacity of 56,000 occupants. On October 15, a Dodgers employee met the group of six at the entrance of the stadium to be walked to the Stadium Club privately. The personnel were given white wristbands that indicated their unlimited access to the buffet. According to official court documentation, Voviette Morgan told personnel that their meeting at the venue would be held in a conference room, however, upon arrival, the investigation confirmed that their reservation inside of the Stadium Club was a “table located adjacent to the glass door entrance with an unobstructed view of the field.”

According to an interview conducted with Paul Delacourt regarding the incident, he stated that a Dodgers security representative informed him that the buffet was open “to all law enforcement officers.” Delacourt stated that he saw at least one LAPD employee at the buffet on the evening of October 15. According to several witnesses, the Stadium Club began to fill up with patrons during the course of the meeting and the noise level increased. Delicate information was still being discussed inside of the Stadium Club.

The OIG investigation found that Special Agent Woolery exhibited poor judgment while at Dodger Stadium. According to FBI documentation, Woolery:

When asked if she believed that holding a confidential meeting at Dodgers Stadium during playoff season, Morgan responded, “Under the circumstances, absolutely, in the sense that we were killing two birds with one stone. We’re all senior folks, we were cautious, we understand our environments and have appropriate discussions.” During the administrative update portion of the meeting, Special Agent Moon stated that he spoke about the need to “spend our money” before the end of the fiscal year. According to the OIG investigation conducted, this portion of the meeting lasted four minutes.

Paul Delacourt has been reassigned to the agency’s headquarters in Washington D.C. Lawrence Berger, an attorney representing Delacourt, stated the reassignment was not a disciplinary action. The other five FBI personnel named in the investigation remain at the Los Angeles Division headquarters.