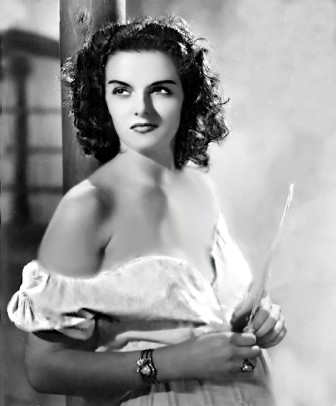 HOLLYWOOD—Born Ernestine Jane Geraldine Russell on June 21, 1921, in Bemidji, Minn. to a U.S. Army lieutenant and an actress who was part of a traveling troupe, Jane Russell seemed destined for Hollywood stardom. In the early 1940s, Russell caught the eye of a young billionaire who would buy RKO Studios and become as famous as all of his stars and starlets. That billionaire was Texan Howard Hughes, who would not only become an entertainment icon in his own right, but he crafted Jane’s buxom and sensuous image and even was credited with creating what would later be called ”˜the wonder bra’. It was used as a publicity gimmick to garner attention for the actress from the Hollywood media and men around the world.

Russell’s first film “The Outlaw” in 1943 has become one of the all-time classic Western genre cult films in history. During the 1940s and ”˜50s, Russell would become widely known as a sex symbol. The height of that notoriety piqued in 1953, when the actress starred opposite 20th Century Fox bombshell Marilyn Monroe in “Gentlemen Prefer Blondes.” Despite starring in nine films prior to this hit movie, Russell until that point was not considered a serious actress. Historians would later note that her career continued to climb the ladder, and she would receive more serious roles such as “Hot Blood” and “The Tall Men.” She would also do television later in her career; her last television performance was in 1986 starring as Ava Fontaine in NBC’s “Hunter.”

Russell’s early ambition was to become a designer of some sort, but her mother had other plans. She made sure her daughter took piano lessons and while living in Burbank, Jane was involved in several theatrical productions at Van Nuys High School. After her father died at the age of 46, Jane decided she would become a receptionist after graduation, so that she could help support her mother. However, when she started modeling for extra money, her career began to take off and she later decided to study drama with Max Reinhardt’s Theatrical Workshop.

By the time Jane was a young woman, she would be signed to a seven-year contract with RKO Studios and her career was not the only thing studio honcho Hughes was interested in. The young actress would become almost an obsession of Howard Hughes, as did actresses Katharine Hepburn, Ava Gardner and Terry Moore, to name just a few of his alleged conquests on the RKO casting couch.

By 1943 Jane’s voluptuous figure and cleavage in “The Outlaw,” a story about Billy the Kid, would become the focus of the Catholic League, which at the time branded her an indecent role model. The film opened in limited release, not being shown in much of the south. Despite RKO historians stating that Russell wore the bra in the film that Hughes personally designed, she stated in her 1988 autobiography that his design was inferior and she in fact wore one of her own bras in the famous scenes from the film.

In the mid 1940s Jane began a career in music, singing with the prominent Kay Kyser Orchestra on radio, and later released two singles with the band titled, “As Long As I Live” and “Boin-n-n-ng!” Columbia Records also released during 1947 her hit song “Let’s Put Out The Lights,” but her singing career ended soon after. However, in 1950 the star did release “Kisses and Tears” with the legendary crooner Frank Sinatra.

She worked with many of Hollywood’s biggest leading men, from Robert Mitchum and Groucho Marx to Vincent Price and Jeff Chandler. In 1953 she and her “Gentlemen Prefer Blondes” costar Marilyn Monroe put their hand and footprints in the cement in front of Grauman’s Chinese Theatre, which still exists today. Monroe died just seven years latr of an apparent drug overdose.

In later years, Russell enjoyed her gospel singing and worked with singer Sally Todd, who reportedly adored her. Russell’s music conductor Peter Clark was unable to be reached for comment about the star’s death, due to a trip to Australia he was taking at the time she died. However, Hollywood mogul and famed manager Budd Burton Moss, who knew Russell, said “Jane Russell certainly turned Hollywood around in the 1940s with a unique style of the sex appeal on the big screen. There were few actresses who could compare. Perhaps Ruth Roman and Ava Gardner, but no one in this current century even comes close.” “One of the things I admire most about her is her genuine love and commitment for what was thrust on her because she was so beautiful and sexy,” said actor Jack Betts. “She was an original.”

Jane Russell died of respiratory failure on Monday, February 28, in Santa Maria, Calif. at the age of 89. A private memorial service was conducted. A public memorial will be announced at a later date.