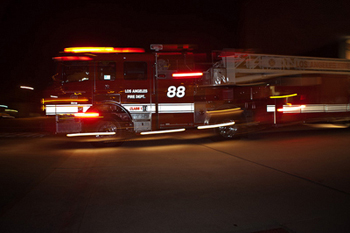 SHERMAN OAKS—Nearly an entire family’s home went up in flames and one firefighter was injured after a Christmas tree caught fire during an “Armenian Christmas” celebration on the evening of Friday, January 6, 2012.  After being called to the scene of a reported “structure fire” around 7:09pm, 60 members of the Los Angeles Fire Department encountered “smoke showing” from the 5,500 square-foot, two-story residence at 5049 North Matilija Avenue.

After gaining entry into the 3-year-old home, firefighters under the command of Battalion Chief Pete Benesch made their way to the second floor with hoselines, as the tree had burned completely and already extended up to the foyer. Firefighters quickly extinguished the fire on the second floor, but not before it made its way up into the large attic space.  The attic, which was compartmentalized, was challenging for firefighters as they had to chase this “pesky” fire into small areas of the attic by cutting through several plywood walls.

The blaze was completely extinguished in 1 hour 2 minutes but not before one firefighter, who sustained minor injuries during firefighting operations was treated and transported to a local hospital.  The family was forced to spend the remainder of their Christmas night elsewhere as the home had suffered extensive fire-related damage.

The fire was found by a family member who had been startled by the sound of smoke alarms and came rushing into the living room of the home to find the family’s 20” fully decorated Christmas tree engulfed in flames.  Firefighters were called after attempts made by the homeowner to suppress the fire with a garden hose proved to be no match for the flames.  The family then fled from the home for safety.

At the time of the fire, the family was celebrating their “Armenian Christmas” which is traditionally celebrated on January 6 by Orthodox Christians including Armenian people who consider that date to be the original Christmas Day according to the ancient Julian calendar.

LAFD Spokesman Matt Spence said the fire served as a reminder to everyone that if you have not yet removed your Christmas tree from your home, please do so quickly and safely.

The estimated losses for the fire were not available at the time of publication. According to a Zillow.com real estate listing, the home was sold on November 16, 2007 for $720,000.  An investigation as to what caused the fire is currently underway.