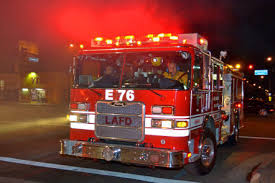 The group of 32 firefighters upon arriving in the residence acted fast and in a total of 15 minutes the knockdown was successful meaning that the fire was ceased. Also, according to LAFD spokesman Erik Scott, the attic fire on the one-story house residence resulted in no injuries. Officials have not yet determined an exact cause of the fire.