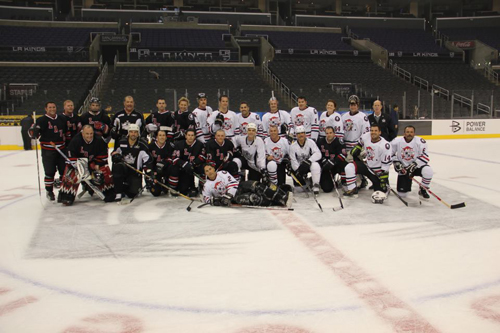 In a match where LAFD defeated the Patriots by a count of 6-1, all proceeds from the hockey game at the arena home to the National Hockey League’s (NHL) Los Angeles Kings went towards benefiting the Wounded Warrior Project (WWP), a non-profit organization founded in 2003.

According to WWP’s website, their mission is “To honor and empower Wounded Warriors.”  They seek to assist men and women of the armed forces who have been severely injured during the wars in Iraq, Afghanistan and other locations around the world.  The Jacksonville, Florida-based charity also aims to raise public awareness and seeks assistance for the needs of injured service members.  This organization also strives to provide unique, direct programs and services to meet the needs of injured service members.

To date, about 94% of family support participants have learned self-help techniques from WWP while 325 families have been served for physical health and wellness.  In addition, 945 warriors have been enrolled in Warriors to Work, a free program intended to help wounded military personnel transition back into the civilian workforce through career counseling services and job placement assistance.  Additionally, 5,929 phone and e-mail cases have been resolved for members of the WWP.

The Patriots hockey team was founded as a way to use their love for the game of hockey as a way of giving back to the military community, according to their Facebook page.  They plan to play a series of hockey games throughout Southern California in order to raise money and awareness for various military organizations (including WWP) and non-profits that assist service members and their families with hardship encountered during their time of active duty.

LAFD’s hockey team, which is made up of over 40 active firefighters, is a non-profit organization that competes in a weekly police/fire league in addition to tournaments and charity games.  Except for Sunday’s game with the Patriots, LAFD’s hockey team raises money to support the operations/expenses of the team but also to benefit charities such as the Los Angeles Firemen’s Relief Association’s Widows, Orphans and Disabled Firemen’s Fund, according to the team’s Facebook page.

For more information about WWP please visit www.woundedwarriorproject.org or call (877) 832-6997.  Donations can be made on the website.