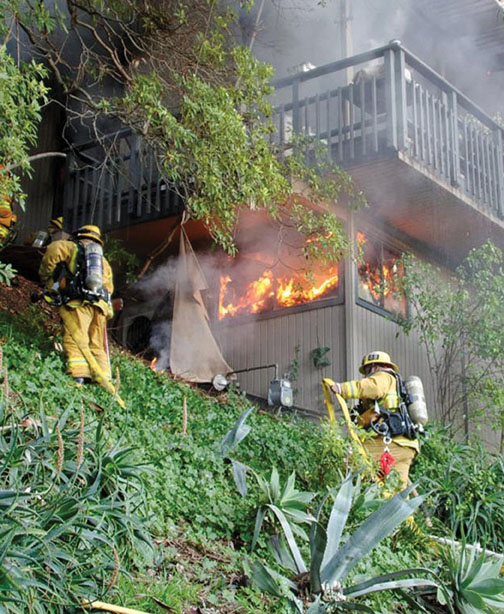 SANTA MONICA—On February 12 members from both the Los Angeles and Santa Monica Fire Departments teamed up to tackle a fire that threatened a three-story residence near Pacific Palisades.

At approximately 6:45 a.m., firefighters responded to a cell phone call regarding a structure fire at 766 N. Kingman Ave. According to officials, crews arrived quickly to the site and began battling flames that “had taken hold of a combination basement and crawl space” below the three-story hillside home. The fire spread up the walls, igniting eaves and dead leaves that had accumulated on the roof.

Firefighters located two residents that had been in the home when the fire started. The individuals who had been able to exit the residence prior to the rescue team’s arrival did not receive medical assistance; one declined treatment, the other left before treatment was offered.

The fire took over an hour to extinguish. No injuries were reported.

The fire is currently under investigation by local law enforcement agencies. At this time, estimated financial loss caused by the fire has not been determined. The incident has been turned over to the Santa Monica Fire Department who will continue investigating the cause of the fire.