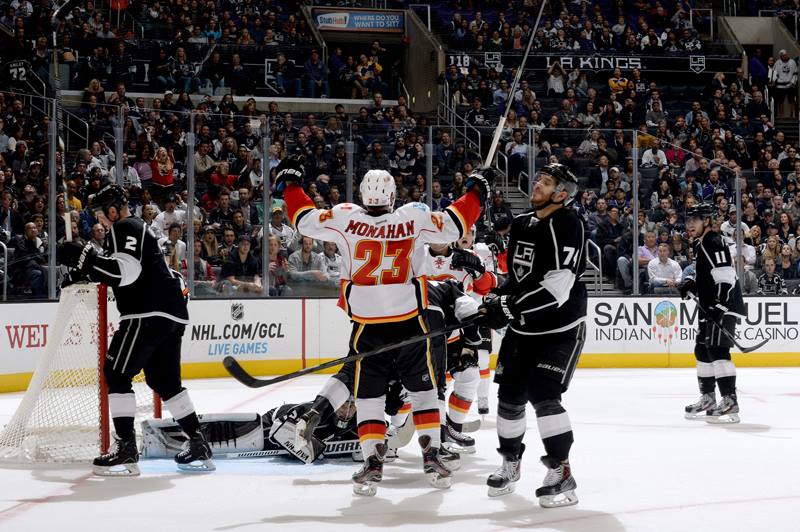 LOS ANGELES—The Calgary Flames won the battle of most goals on the man advantage. Their fifth and final power play of the night came on a goal with 30 seconds left to edge out a 3-2 win over the Kings at Staples Center on Monday night. TJ Bodie’s last ditch effort gave him the game winner and his first of the season with a wide open centering shot.

The Kings continue to struggle in the newly formed Pacific Division under the NHL realignment going 6-4-0 in their last 10 and flat at a .500 percentage at home. With the addition of Vancouver, Edmonton and Calgary to their division it becomes more of a challenge to make the top three by season’s end.

The second period saw the Flames find their fire with Michael Cammalleri scoring his first on their opening power play where Mark Giordano took a rough check from Matt Greene that left Cammalleri open on the opposite end to tie the game. Calgary responded later with their second goal on the extra man with Sean Monahan’s shot that gave him six on the year and third in four games. LA battled back on their second power play goal from Jeff Carter who brought the puck from end to end with a wraparound to even the game at two.

With 29 seconds left on the clock and the power play coming to a close, Bodie’s skate up the middle set him up for a shot through traffic that put a much needed victory on their side. Calgary currently sits behind Los Angelesin sixth, four points out of the top three. The win gave Ramo his first of the season stopping 27 shots with a .931 save percentage.

Quick dropped his second in six games making 22 saves with a .909 save percentage leaving him second to last in the league. The Kings head out toPhoenix to take on the Coyotes who have been on a hot streak, winning their last two by late offensive rushes that left Detroit and Calgary spooked.