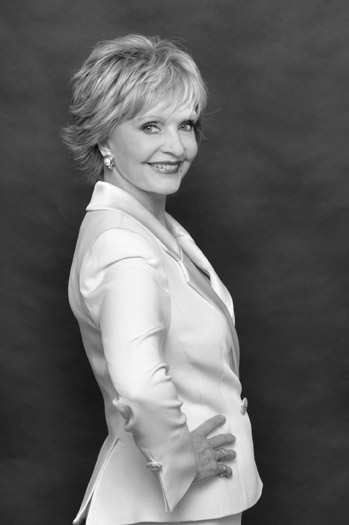 I caught up with Florence between rehearsals on Thursday, and the former star of “The Brady Bunch” admitted she’s a bit nervous about her debut on the hit show. Here’s the scoop on Florence’s new big deal! I’m sure lots of fans of Carol Brady will be rooting for Florence this year.

Q-When will your rehearsals start for the show, Florence?

A-“This Saturday, because I was doing a play [“Love, Loss and What I Wore”] at the Geffen Theatre through this last weekend and then Monday they made the announcement. That was followed by a photo and press day. Then the next day I shot a commercial. So, this Saturday will be the first opportunity we have to get together. But, I’m so excited”

Q-Which professional/coach will you be paired with? Whoever it is, lucky guy!

A-“Thanks, Tommy, Corky Ballas, and I am thrilled. He is who I wanted and prayed that I would get him and I did. He is wonderful, caring and just gorgeous.”

Q-Are you excited, and who was the first person who called you after it was announced that you’d be one of the celebrity dancers this season?

A-“Very excited. The first call came from my daughter Barbara, who works for the Academy. Marissa [Jaret Winokur], who I was working with at the time in the stage production of ‘Love, Loss and What I Wore’ at the Geffen and who was a former ”˜DWTS’ participant, was second. Then I got the sweetest note from another previous ”˜DWTS’ dancer, Leeza Gibbons, which I truly appreciated.”

Q-I won’t ask are you nervous, you are such a pro. However, are you going to have any lucky charm to carry on stage with you when you dance?

A-“Actually, I do still get nervous. When I think about dancing on our first night, September 20, I get butterflies.”

Florence will have many of us rooting for her. Beverly Hills socialite and actress Constance Towers, who portrays Helena Cassadine on “General Hospital” tells Canyon News, “I’ll be watching Florence and wishing her luck. She’s a beautiful person and a great dancer.”

“Dancing With The Stars” debuts on September 20 on ABC.