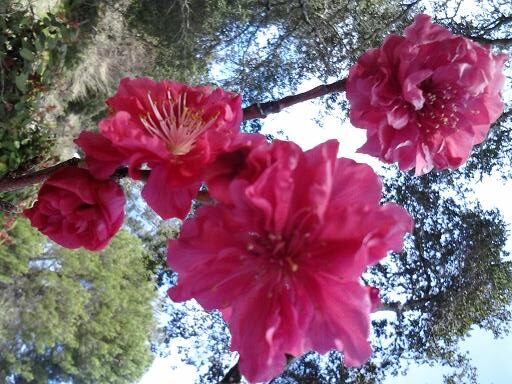 UNITED STATES—All of the popular fruit trees produce flowers. Otherwise, they could not produce fruit. The stone fruits, such as almond, apricot, cherry, peach, plum and prune, bloom very impressively this time of year. (Stone fruits have single large seeds known as stones. Almonds are the large stones of small fruits that resemble peaches.) The pomme fruits, such as apple and pear, bloom about as prolifically shortly afterward, followed lastly by related, but rare quince.

The difference between these trees and their counterparts known as ‘flowering’ trees are not so much the flowers, but the fruit. ‘Flowering’ is something of a euphemism for trees that might otherwise be known as ‘fruitless’, since they produce either uselessly small fruit, or no fruit at all.

This may seem silly to those who enjoy growing fresh fruit in the garden. However, fruit trees require so much pruning in winter, and can be so messy if the fruit does not get completely harvested. The flowering trees are happy to provide the profuse bloom without so much maintenance and potential mess. Because they were developed as ornamental trees, their flowers are more impressive, with many more shades of pink, as well as white. Many types bloom with big and fluffy double flowers.

Flowering cherry and plum are probably the most popular of the flowering stone fruit trees. Most flowering plums have purplish foliage, so they are more commonly known as purple-leaf plum. Flowering almond, apricot, prune and peach are relatively somewhat rare. Most flowering stone fruit trees are completely fruitless, but some purple-leaf plum can produce messy and sour plums as they mature.

Flowering pear is probably not recognized as such because it is more often known as fruitless pear. Ironically, it can produce enough tiny pear fruit to be messier than other flowering fruit trees. Flowering pear blooms only white, and is not as florific as the other flowering trees, but grows large enough to be a mid-sized shade tree, and has the advantage of remarkable foliar color in autumn. Evergreen pear is an entirely different sort of tree that only blooms well if the weather is just so, and lacks fall color (because it is semi-evergreen).

Since it does not produce an abundance of cumbersome fruit, flowering peach, Prunus persica, does not need the aggressive pruning while dormant through winter that fruiting peach requires, and can get significantly larger. However, tip pruning after bloom instead promotes shrubbier growth that blooms more prolifically the following spring. The fluffy double flowers are clear white, bright pink or rich pinkish red. ‘Peppermint’ flowering peach has red and white flowers, with a few flowers that are only white, and sometimes a few that are only red.