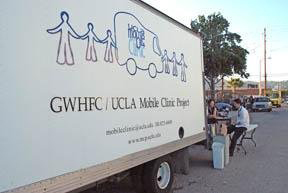 If approved, the ban would keep the Greater West Hollywood Food Coalition (GWHFC), which is located at Sycamore and Romaine, from feeding the homeless and the hungry. According to the motion, LaBonge said there “are numerous non-profit organizations that provide services to the needy, including but not limited to, shelter, clothing, storage of personal effects and feeding programs,” much like the GWHFC.

“Due to the large demand to feed those in need, these activities frequently spill out into the sidewalk and street, creating numerous public safety and public health concerns,” LaBonge said in the motion. “City departments should come together to determine a solution that addresses non-commercial feeding in the public rights of way,” he added.

Ted Landreth, one of the founding members of the non-profit GWHFC, told Canyon News they have been serving the homeless and hungry at their current location for 23 years and have never received any liability complaints.

Landreth said their sister organization, a UCLA/GWHFC mobile clinic founded 13 years ago, has also been prohibited from using chairs and tables and is unable to set up their pop-up exam room. He said patients are treated while sitting on the sidewalk.

Petitions signed by those in opposition said the motion should be passed immediately to stop the GWHFC “from operating on the sidewalks [because] these types of programs have proved to bring a wide array of serious criminal activity into our community.” The petition further said it is both “unfair and unlawful to permit the daily assemblage of 100+ homeless people to congregate in our neighborhood bringing the havoc that predictably follows.”

Landreth said the claims of encouraging homelessness and criminal activity are untrue and he has tried to respond to the accusations, but no one will talk to him.

“We are against crime and actively discourage crime,” he said. “We tell everyone that comes for a meal that there’s a surveillance camera and if they come to commit a crime, they are not welcome,” he added.

Jim Omahan, operations manager for Hollywood Media District BID, issued a statement questioning whether a food program can exist without the support of city officials and services. BID, according to the statement, is “committed to supporting a homeless services project in the Hollywood area.”

“It is the position of the HMD that the GWHFC’s feeding program is a public nuisance and the City of Los Angeles must take immediate action to discontinue the GWHFC operation at its current location and that any future operation be within the confines of a private or publicly owned property in accordance with all building, safety and health codes,” Omahan said.

Business owner Lyn Luzwick wrote a letter to Carolyn Ramsay, chief of staff to LaBonge, that said she was originally not thrilled with the GWHFC coming to the neighborhood and thought they would just go away.

“After many years of watching the incredible work that they do, I decided to help out,” Luzwick wrote. “Sometimes things are put before us as a test of who we are as individuals. I found out that many of the people who seek help at Sycamore and Romaine were not being helped by anybody else—remarkably, in this society that professes to be the greatest on Earth. I wondered what had gone wrong,” she added.

Despite the motion and hardships the GWHFC has gone through, Landreth said the odds of the motion passing are close to none, noting that the approval would be a violation of their constitutional rights.

“We believe that if the City Council was unwise enough to pass a motion banning the serving of a meal to the homeless in public rights of way, there would be a lawsuit filed by the American Civil Liberties Union on our behalf, which would be very costly to the city,” Landreth said.

During the last several years, Landreth said the GWHFC has been asked to leave or relocate and even received offers to help relocate, but when it came down to it, no one followed through.

“We’ve been altogether willing to consider alternate sites,” he said. “All we need is a parking lot for three hours every night and four on Wednesdays when the mobile clinic joins us,” he added.

Luzwick’s letter confirmed there have been offers to help find a new location, but they never follow through and the “words are empty.”

Other council members, like Richard Bloom (D-Santa Monica), have issued statements in support of LaBonge’s motion.

“GWHFC’s commitment to serving the needs of homeless individuals by providing free meals is admirable,” Bloom said. “However, I strongly believe that the location of service is substandard and should be relocated. Indoor, sanitary facilities that respect human dignity and co-located supportive services are strongly preferred,” he added.

Landreth said the main goal of the GWHFC is to serve the homeless and hungry.

“We are all volunteers and we don’t cost anybody anything,” he said. “We prepare a brilliant meal every night for up to 200 people and we do it with smiles on our faces because it’s our view that when you’re homeless and hungry, you need to be fed. Once you’ve got that, you can start thinking about what the problems really are and get help. We provide a point of contact for those who don’t have anyone helping them.”