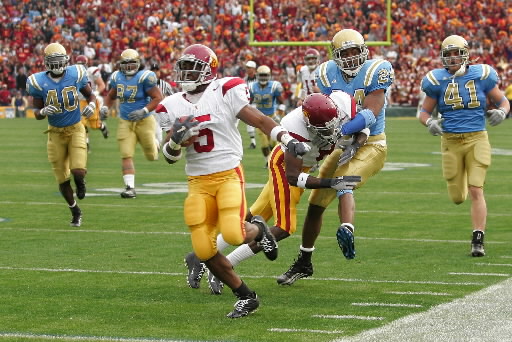 WESTWOOD—There’s an old saying that states, “Those who fail to study history are doomed to repeat it.” Well, Texas head coach Mack Brown could have benefited a lot from this quote before their game against the Bruins last Saturday because it’s just like in 1997 when UCLA walked into the Longhorns backyard and dominated them.

A score of 34-12 is not as daunting as the 66-3 beat down the Bruins put on Texas 13 years ago, but the way they won was just as impressive. Many people were doubtful the California boys would put up much of a fight against the football-crazed state of Texas, especially after viewers around the country watched Stanford push UCLA around for a 35-0 victory in the Rose Bowl. The Bruins were the only people who walked into that stadium believing they would win—anyone who watched their game against Houston probably believed as well—and from the very first defense series for the Bruins it was easy to see that it was going to be a long day for the Longhorns.

The real problems for Texas didn’t start until the second quarter. After the Longhorns stopped the Bruins deep in their own territory, they were forced to give the ball back to the home team. Unfortunately for Texas, their offense never got the ball back. Curtis Brown made a horrible decision to field the ball inside the five-yard line and fumbled the ball after a hit by Sean Westgate.

Two plays later, Kevin Prince hooked up with Ricky Marvray for a one-yard touchdown and UCLA’s first points of the game.

From that point on the Bruins dominated the rest game on both sides of the ball. The offensive line paved the way for Jonathan Franklin and Derrick Coleman, who along with Prince and freshman running back Malcolm Jones rushed for 264 yards against the nations number two rushing defense.

The Bruins had a chance to put some more points on the board near the end of the second half, but defensive back Aaron Williams came flying in on a blitz and caused Prince to fumble the ball and give Texas a chance to cut into the 13-3 lead of the Bruins. With the aid of penalties, the Longhorns moved into field goal range, but the UCLA defense was able to hold and maintain their lead.

Coming out of halftime the Bruins refused to give the Longhorns a chance to get back in the game. The offense marched down the field on the opening drive and added another touchdown to their lead. Not to be outdone, the defense gave virtually nothing to the Texas offense besides a field goal and a late touchdown in the fourth quarter.

Before the clock hit all zeroes most of the pro-Texas crowd refused to stick around and had begun filing out of the stadium. The few that remained had a look of absolute shock and disbelief on their faces while two small sections of UCLA fans were going out of their minds around them.

There is no mistake that this was a big win for the Bruins, but now it is up to them to keep it going. The last two season coming off big wins against Tennessee the Bruins faded throughout the rest of the season, so the football team will be looking to change their fortunes in October this year.

“To keep it going we have to have a big windshield, but a small rear-view mirror. About the game I’m just happy we got a win and we have to keep the streak going,” said running back Johnathan Franklin.

The season has taken an upswing for the Bruins after this monumental win against Texas, but the only remaining question about this team is if they can keep it there.