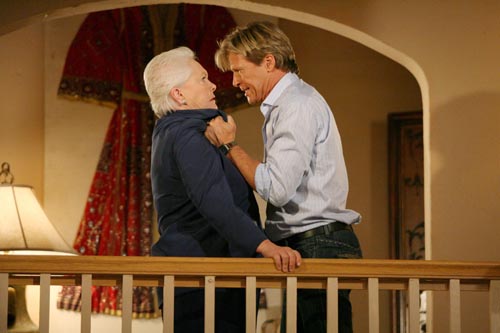 HOLLYWOOD —This week’s consideration is Susan Flannery who is best known as Stephanie Forrester on “The Bold and the Beautiful.” This lead actress winner deserves to be considered for an Emmy for her wonderful work last year. Susan Flannery, a Golden Globe winner deserves every award she has received and then some. The beautiful and elegant actress is considered the Bette Davis of the 21st century. Ms. Flannery’s work opposite greats like Betty White, Ronn Moss, Jack Wagner and Katherine Kelly Lang on “B&B” has been talked about for decades. The always-in-control actress is perhaps one of the kindest and most likeable women in Tinseltown, but there is no denying her marvelous attributes as a thespian.

Susan Flannery’s Stephanie last year faced off with her husband, his current wife and she continued her battle with her own mother, Ann Douglas played by talented icon Betty White. Ms. Flannery showed us a side of Stephanie that we hadn’t seen before. The broken Stephanie who lost her husband again for a younger woman was placed in a situation where she didn’t realize whether she wanted to go on living or not. Who knew that her arch-enemy Nick Marone who had tried to strangle the Forrester matriarch and throw her off the balcony of her beautiful Bel Air mansion would be her savior as well? Bradley P. Bell, the much talented writer and producer knew! He put Stephanie on a pier at what seemed to be the lowest part of her life and down the beach came her knight in shining armor. Nick Marone played by Jack Wagner talked the lady out of offing herself and soon gave her a job at his company, Jackie M Designs.

Within months Stephanie’s business savvy made Jackie M a fashion icon and one of the most successful fashion houses in the nation. Then Stephanie with her pride made herself an all new family, after being exiled by her own. Within months of Stephanie finally having her life back again, in came her mother Ann with a death sentence. A storyline that was written so brilliantly had made Susan Flannery a woman, an actress to be reckoned with again. Ms. Flannery’s strength and deep character came through the scenes when Stephanie battled her mother and then ultimately her sister Pam. Brad wrote the storyline of a dying parent so realistically. Of course Stephanie and Pam would fight over the best care to be given to mom Ann during her last days.

Ms. Flannery performed amazingly and with aplomb. This lady cannot be overlooked come Emmy nomination time. Her work showed every emotion known to man. She was angry that her mother came back into her life at the most inopportune time, she was sad that she would be losing her mother to cancer and she was angry that sister Pam wanted something different for their mom’s death than what Ann and Stephanie had initially agreed. Susan didn’t rest on her laurels, not at all. She showed the viewers what great drama is all about. She also showed her peers what a sensational actress she is, and why she’s the queen of daytime television.

Please consider Ms. Susan Flannery when voting and choosing the best actors in 2009. She has been that for decades now.

Judge Grants Delay In Trial Over Rehiring Of Deputy Mandoyan