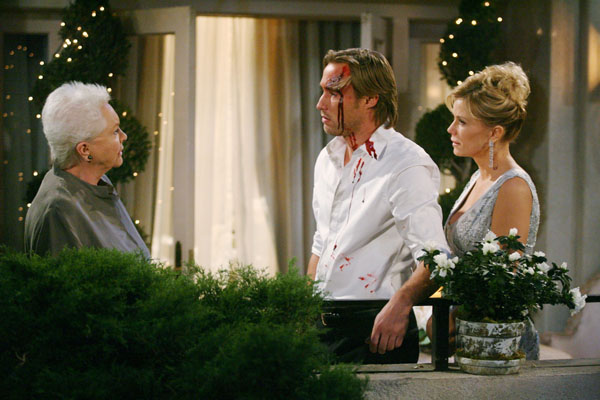 HOLLYWOOD —Very few actors offer such amazing performances day after day on daytime television as Kyle Lowder who portrays Rick Forrester on “The Bold and the Beautiful.” The CBS hunk plays the eldest child of Eric Forrester and Brooke Logan. Rick has been in a lot of trouble in the last few years, thanks to the magnificent writing of Bradley P. Bell, and fans have enjoyed Rick’s descent into almost madness and his ascent back to normalcy. If you can call any Forrester or Logan normal that is.

Kyle Lowder is what Gene Kelly was often called: a ”˜triple threat.’ In Hollywood there are lots of handsome actors, many talented stars, but there are very few who are capable of doing it all and well enough to be called a triple threat. This includes, singing, dancing and acting. Lowder not only does it all, but does it with the magnitude that makes him the most superior actor on television today. That includes daytime and prime time actors.

Acting-wise Lowder’s performance is astounding each day. Whether Rick’s plotting to destroy his half-brother Ridge, or trying to right a wrong, Kyle Lowder’s presence is mesmerizing and perhaps he’s so handsome many of his peers don’t take his work seriously. That being said, “B&B” supports Lowder, actors on the show love working with the always consummate professional who is courteous and prepared in every scene he shoots. Kyle is fan-friendly and very serious about his profession of acting, and it shows.

Lowder had an amazing storyline the past two years and perhaps at this point it’s not front burner, but it shouldn’t matter. Even just as a supporting player to someone else’s storyline, the handsome thespian brings strength to every scene. Fans are dying to see Rick get involved in the Forrester vs. Logan feud at Forrester Creations. It’s a battle between his mother (Brooke) and two women he’s been involved with (Steffy and Taylor). Kyle Lowder’s work in 2009 gives the actor the opportunity to be nominated for a daytime Emmy. It would be criminal not to nominate and even award this man the coveted Emmy.

Kyle Lowder’s ability to be broody and vindictive is only part of the excitement his character conveys to the viewers. Whether good or bad, one has to seriously look at Lowder’s storyline from the time he was blamed by Stephanie and Ridge for the death of Phoebe and where his character has progressed at this point. Bradley Bell has brought a maturity to Rick Forrester, but it’s Kyle Lowder who makes it and everything else Rick does, believable to the viewers.

Kyle Lowder can be seen weekdays on “The Bold and The Beautiful,” which airs weekdays on CBS.