UNITED STATES−Former FBI agent, Peter Strzok, defended himself in federal court in Washington D.C. on Monday, December 30, in a lawsuit filed to have his job reinstated arguing that texts about President Trump are protected by his First Amendment rights.

Those texts transpired by Strzok and his former girlfriend/colleague, Lisa Page. The device Strzok used to text Page was government issued. He argued that his text messaged should have been protected as they are private speech.

House Oversight Committee Chairman, Trey Gowdy argued in court that no one had yet been interviewed from July 31 to August 8. The first interviews transpired on August 11, 2016, 11 days after the Mueller investigation commenced.

“[That makes] me wonder, you haven’t interviewed anyone. You’re investigating this alleged Russian collusion with the Trump campaign. You’re the lead investigator. You originated the investigation. You’re the point of contact. You drafted the document, and here you are before you interviewed a single solitary witness saying ‘F-Trump,” said Gowdy.

Gowdy added, “On August the 8th, you still haven’t interviewed anyone and you get another text from your um colleague, Lisa Page that says, ‘Trump isn’t really going to become President Right?’ Which you responded, ‘No he’s not. We’ll stop it.’ 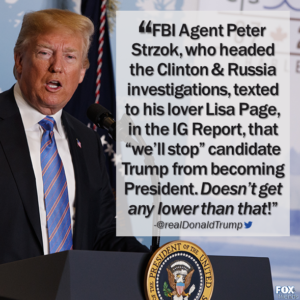 “Mr. Gowdy, two answers to that, one on how many interviews had or had not been conducted, I have been directed by the counsel of the FBI not to answer that question. Second Sir, I think it’s important to take note in the context of which these texts were written,” said Strzok.

Gowdy wanted to know who Strzok was referring to and what “it” meant, but he noted he did not remember writing that text.

“I have no friends to reward and no foes to punish.  We’re going to go wherever the facts take us. Facts are neither Republican nor Democrat.  They are facts,” said Gowdy in a quote on his website.