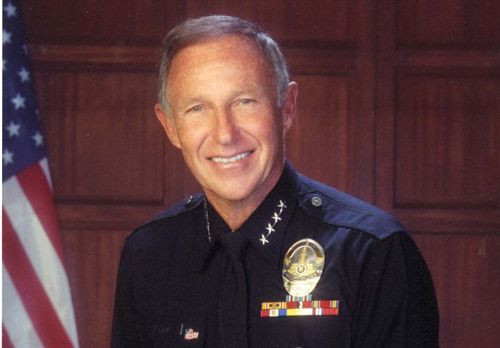 LOS ANGELES —The Los Angeles Police Department is in mourning, as they have lost one of their own. On Friday, April 16, former police Chief Daryl F. Gates, 83, died after a short battle with cancer.

Gates, who was the 49th Chief of the LAPD, passed away in his New Port Beach home with loved ones surrounding his bedside.

In a prepared statement, current Chief Charlie Beck said, “Daryl Francis Gates was a one-in-a-million human being. He inspired others to succeed and, in doing so, changed the landscape of law enforcement around the world.”

“Gates accomplished great things in both good and difficult economic times. And the success of several major programs and events in the city of Los Angeles and around the world, especially the Los Angeles 1984 Summer Games, have their roots in the leadership achievements of Daryl Gates,” said the release.

Gates was born on August 30, 1926. While growing up in Glendale and the Highland Park area of Los Angeles, he joined the United States Navy for two years after graduating high school. Gates also attended the University of Southern California and earned several degrees.