UNITED STATES—Fox News severed ties with President Donald Trump’s supporters Diamond & Silk after the pair publicly stated false misinformation regarding the COVID-19 pandemic through  videos and social media. On Monday, June 4, the duo tweeted: “We are the United States, not Communist China. This Deep State experiment that we’ve all been suckered into must end or we will no longer have our freedoms or our country. We were asked to go inside to flatten the curve, not the economy.”

Lynnette Hardaway (Diamond) and Rochelle Richardson (Silk) are sisters from North Carolina, known for their political commentary on vlogs, and strong devotion to President Trump. They rose to fame after their unyielding support of Donald Trump during the 2016 election. Their consistent appearances in the conservative media led to them being hired by Fox News in 2018. Their weekly show came to a stop and new episodes have not been posted on the Fox Nation website since April 7, 2020.

“The only way we can become immune to the environment; we must be out in the environment. Quarantining people inside of their houses for extended periods will make people sick!,” tweeted Diamond & Silk to their 1.4 million Twitter followers. 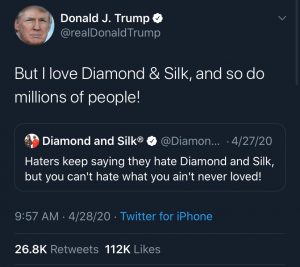 From 2017-2018, YouTube demonetized 96 percent of Diamond & Silk videos stating it was “unsuitable” and Facebook censored their page deeming that it was “unsafe to the community.” At a U.S. House Judiciary Committee, Diamond & Silk alleged that they were being “censored” by Facebook due to their support of President Trump and their conservative views.

The Trump campaign remains to stand by Diamond & Silk stating they are co-chairs of Black voices for Trump and Women for Trump board members. President Trump responded to a retweet by Diamond & Silk after Fox news reportedly cut ties with the duo, stating:

“I love Diamond & Silk, and so do millions of people.”