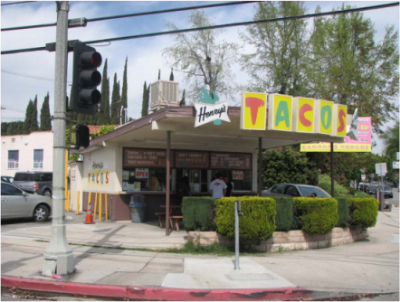 STUDIO CITY—The owner of Henry’s Tacos in Studio City ended 2011 worrying that her family’s taco stand, which has endeared locals for 50 years with its so-called “gringo tacos,” would shut down when the lease agreement expired on New Year’s Eve.

On Thursday, January 5, Janis Hood, the business owner, informed followers of a Facebook page created by fans of the taco stand that Mehran Ebrahimpour, the landlord, is not interested in renewing the lease for the property located on 11401 Moorpark St. In addition, the landlord asked that the monthly rent without a lease would have to be 150 percent of what Hood was previously paying, she said.

“You can imagine the amount that I now have to pay. I’m TIRED, my dear friends, and I don’t want to DIE because of the stress of this. Don’t know what will happen,” Hood said.

Ebrahimpour did not contact Hood prior to the lease’s expiration or serve a notice to vacate the premises, according to a petition website started to keep the stand open. As of January 5, about 2,500 out of 3,000 people had signed their names toward that end.

“It is much more than just a taco stand or business to many of us who grew up in the neighborhood,” the website states. “It is an important part of our collective history that not only has sentimental value, but cultural and historical value.”

Hood maintains that the landlord did not like that the Los Angeles Cultural Heritage Commission voted in 2011 to recommend Henry’s Tacos for city landmark status. The commission found that the taco stand, which was designed by John B. Ferguson, met the criteria of the Cultural Heritage Ordinance because of its building type and design.

Specifically, the taco stand exhibits traits of roadside restaurants from the mid 20th century. Architectural historian Alan Hess said the stand also has a broad Googie style defined by an upswept roof, outdoor areas and scaled to the street. It has remained unchanged since 1961 and did not sustain damage during the 1994 Northridge earthquake.

Landmark status would protect the structure from demolition, incompatible uses and construction.

In a recommendation report for landmark status, the Department of City Planning states, “While SurveyLA has not completed a comprehensive city-wide study of this building type, the number of significant early and mid-20th century walk-up food stands appears to be diminishing and as such are becoming a rarer building type.”

Ebrahimpour had not responded to a request for comment at press time.