“Adam Schiff has proven in this process that he cannot adhere to the fundamental principles of fairness,” said Gaetz in the video.  The resolution passed on October 31, which rules will require all witnesses submitted by Republicans to be approved by Chairman Schiff.

In the video footage, Gaetz cited rule #23 stating that “clause 1 and 2 of the code of conduct of the House of Representatives requires that we engage in conduct that brings credibility to the House and we don’t impair the credibility of the House.”

“When Adam Schiff engaged in a theatrical retelling of the conversation between President Trump’s conversation with President Zelensky to deceive and disorient the American people. He acted in a way that was not consistent with House rules that were not consistent with House ethics, and so, now on the eve of a vote, that will give unprecedented power to someone that does not deserve it, today, I am going to file an ethics complaint against Adam Schiff for violating rule 23 of the House,” said Gaetz.

“Adam Schiff also violated rule 11 of the House. Rule 11 of the House requires that if you are going to expel a member of Congress from a hearing, who does not intend to participate by asking questions, that you are required to hold a vote on that measure. Adam Schiff held no such vote when he expelled me multiple times from simply being able to observe what the heck was going on, and so right now I am going to go to the ethics committee, and I am going to file an ethics complaint against Adam Schiff because if House Democrats are going to tomorrow give this man an unprecedented amount of power in the process, they are going to know exactly how he has departed from the rules of the House, and how he has fallen short of the ethical standards of this institution.” 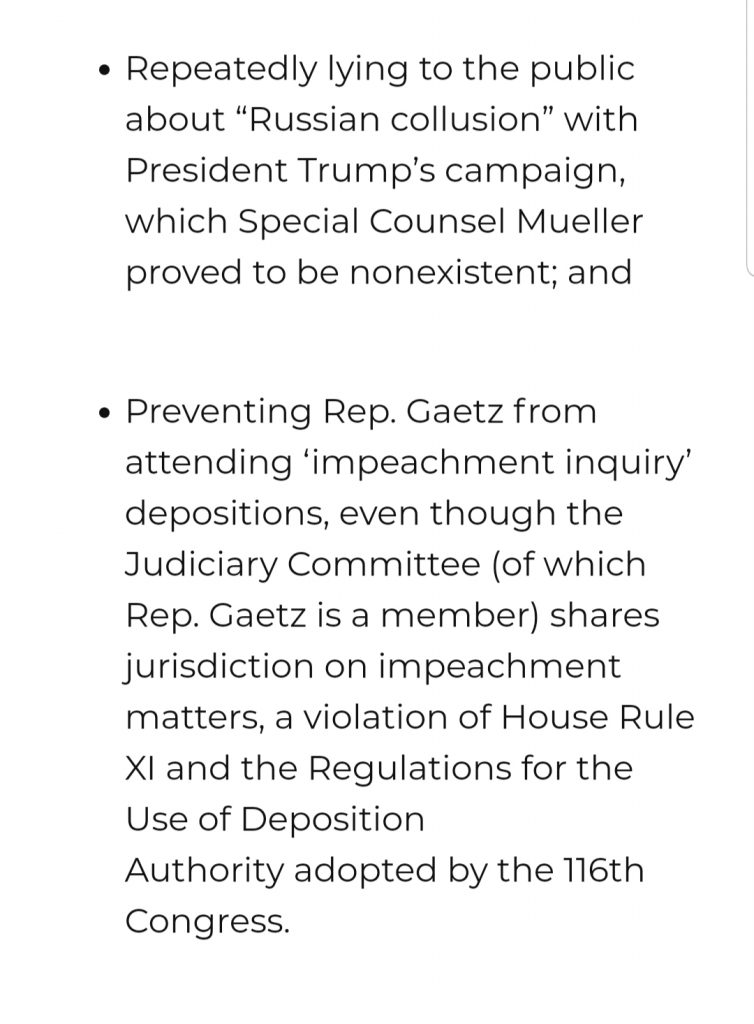 A full congressional record can be found at Congress.gov.

A statement regarding the passing of the resolution by Press Secretary, Stephanie Grisham can be found here.