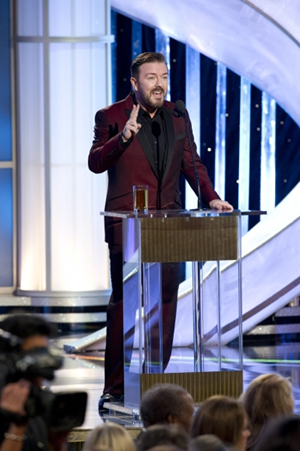 BEVERLY HILLS—Now, where was I? These were the first words that came from Comedian Ricky Gervais as he began his hosting duties for the third time on the 69th Annual Golden Globes at the Beverly Hilton on Sunday, January 15.  Upon hearing this, movie and television stars gasped and braced themselves for what they thought would be a sequel to Gervais’ 2011 Golden Globes no-holds barred performance in which he skewered everyone from famous Scientologists to Robert Downey, Jr.  But as the stars (to their relief) and viewers at home (to their disappointment) found out that night, it was to be a mostly restrained, at times dull performance from Gervais this year.

On the 2011 edition of the Globes, Gervais let celebrities have it with blistering jokes such as thinly veiled references to famous Scientologists (most likely Tom Cruise and John Travolta) as homosexual actors pretending to be straight.  He also took a shot at one of Hollywood’s greatest comeback stories in “Iron Man” and “Sherlock Holmes” actor Robert Downey, Jr. when he said he was better known by people for stints at Los Angeles County Jail and the Betty Ford Clinic.  These jokes, hilarious and also nasty at the same time, were few and far between from “The Office” star on the 2012 show.

Gervais chose to hold back at times throughout the show taking aim at easy targets already ridiculed excessively.  For example, he criticized reality star Kim Kardashian for her brief marriage to basketball player Kris Humphries and also for being a trashier version of Kate Middleton.  He also continued to beat on NBC for being the 4th place network in terms of primetime television ratings.  These topics were disappointing moments for me as I recounted such 2011 gems as Gervais introducing Bruce Willis as Ashton Kutcher’s Dad and referring to Playboy founder Hugh Hefner as “the walking dead.”

I was also disappointed to see Gervais get bested by pop star Madonna.  After Gervais introduced her as “like a virgin” with a rough cough by Gervais quickly following, Madonna countered, “I haven’t kissed a girl in a few years”¦on tv.”  Besides a girl-like run across the stage after Madonna’s comment, Gervais did not return fire at Madonna and put her in her place, which was a letdown for a man of his talents in my opinion.

There were bright spots, however, as Gervais, after introducing “Pirates of the Caribbean” actor Johnny Depp as “the man who will wear absolutely anything Tim Burton tells him to wear,” asked Depp if he had seen 2010’s critically drubbed and box office dud “The Tourist” that starred Depp and Angelina Jolie yet. Another funny moment came when Gervais again poked fun at one of his favorite 2011 targets in the Hollywood Foreign Press Association where he compared the members to the characters from HBO’s hit show Boardwalk Empire as immigrants who came to America and got embroiled in bribery and corruption to work their way into high society.

But probably the most bone tingling moment of the evening in my opinion that came close to matching the hard hitting tone of last year’s show was when Gervais, discussing a shopping list of things from the HFPA he was told he allegedly “couldn’t” talk about, said to not talk about Jodie Foster’s “beaver,” an obvious double meaning that partly referred to the actresses’ 2011 film, “The Beaver” that she directed starring actor Mel Gibson.  Gervais then hilariously added that he hadn’t seen her “beaver” nor had any of the other men he had spoken to at the show that night.  A joke mocking singer Justin Beiber’s paternity test and the only way he could be a father was to use one of Martha Stewarts’ cooking utensils was close to the bone too.

Overall, I think we the viewers were so spoiled by the incredible performance of Ricky Gervais at last year’s ceremony that we had these unrealistic high expectations that could never be matched no matter how great Gervais was this year.  One thing is for sure, although Gervais claimed during the 3 hour telecast that he could say anything he wanted, the comedian was most likely told by members of the HFPA to tone down his material.  Regardless, Gervais should be commended for his impressive ability to keep the show moving.  Although at times his material lacked bite, I still consider Gervais to be one of the best awards shows hosts.  While Gervais says he won’t host the Golden Globes again, let’s hope hosting the Oscars are in his future.