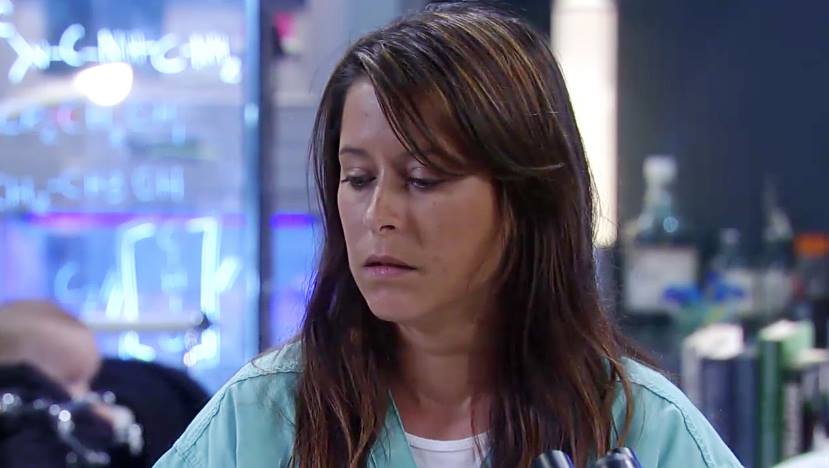 HOLLYWOOD—I love November sweeps because it’s the time of year when all-out explosive action hits the television waves.  Audiences should expect nothing less from ABC’s “General Hospital” which has become must-see TV in the last month.  With the return of fan favorite Robin (Kimberly McCullough) returning to the canvas, the journey for Robin to return to her family has been suspenseful to say the least.

For those of you in the dark, Robin was finally rescued from Cassadine Islandby Nikolas (Tyler Christopher), but found herself in a predicament that left her parents Robert (Tristan Rogers) and Anna (Finola Hughes) trapped in the lab that she spent the last year and a half in.

Trust me things get a bit complicated from here. It appears mastermind Cesar Faison (Anders Dove) faked an explosion at the lab to take Robin hostage in an attempt to get Anna to fall in love with him.  His confidant Dr. Obrecht did Faison’s bidding while disregarding the sanctity of her own child Britt, who has gotten quite close with Nikolas in the recent weeks.

It appears Faison and Obrecht were working alongside Jerry Jacks who was seeking a cure for his ailment; Robin was his only savior. My big question is just why Jerry would steal millions of dollars from Port Charles residents in his aide to cure his disease?  I think there is another power player in the mix, who will be unveiled to audiences in the coming weeks, perhaps a fan favorite from the dead.

Fans have been eagerly watching the relationship between Patrick (Jason Thompson) and Sabrina (Teresa Castillo) who has bonded with Patrick and Emma, during their time of need. There is just one big problem, Sabrina, Patrick and Emma have no idea that Robin is very much alive. She is being held captive on Cassadine Island until she retrieves blood from Luke Spencer (Anthony Geary) that Jerry can use to synthesize another cure.

It’s only a matter of time before someone else stumbles across Robin and the truth is unveiled to the many citizens in PC.  Just when the audience thought the story regarding Robin was heating up, the mob world is in for a few surprises.  Not only has Derek Wells aka Julian Jerome (William DeVry) begun his onslaught to take down Sonny Corinthos (Maurice Benard), but he is using the people closet to him to do his dirty work.

Julian has already gotten close with Carly (Laura Wright) and has recently gotten Morgan (Bryan Craig), Sonny’s youngest child to work alongside him to take his father out.  It’s obvious Michael (Chad Duell) and Morgan have a fractured relationship; its obvious Michael is Sonny’s favorite, even if he refuses to acknowledge it.

Maura West is a revelation as Ava Jerome, a woman who has a master plan, but allows so many things to get in the way of her goals. She has a conscience, but her brother, only cares about his own intentions.  Derek has done a great job covering his tracks, but little does he know Robert, Anna and Sonny have discovered his identity. That means it’s only a matter of time before Sam (Kelly Monaco) and Alexis (Nancy Lee Grahn) learn the truth as well. The bigger question I want answered is just what information Julian Jerome delivered to Robert Scorpio to force the spy to continue the charade that Julian Jerome perished in a shootout; the information had to be explosive. Time will tell when that information is given to the audience.

There’s still the issue of the unsolved murder of Connie Falconeri and we can’t forget about the custody battle unfolding between Lulu (Emme Rylan) and Maxie (Kristen Storms) over baby Connie.  I’m sure before November wraps a few bombshells will be dropped and another murder or two could be expected on “GH.”