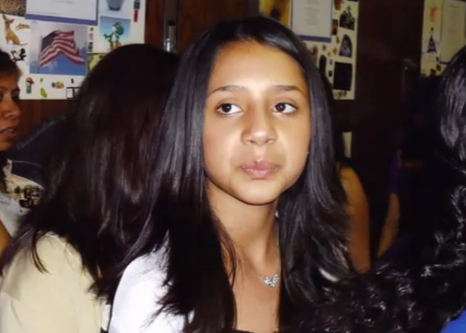 SHERMAN OAKS—On November 4, protesters rallied together to press the installation of a new traffic signal after a vehicle accident led to the serious injury of 10-year-old Angela Rodriguez and the death of her cousin, 12-year-old Emely Aleman.

The traffic fatality occurred on November 2, when the two girls were on a marked crosswalk at the intersection of Laurel Canyon Boulevard and Archwood Street. At approximately 7:20 p.m., the driver of a Jeep Wrangler struck the girls, causing them to be thrown 50 feet, according to witness reports.

The driver, 23-year-old Sherman Oaks resident Thomas Leiner, stopped at the scene and called 9-1-1. Leiner has not been cited or arrested in the accident, according to Valley Traffic authorities.

Angela Rodriguez currently remains hospitalized with grave injuries and may be expected to recover; however, on November 4, Emely Aleman was removed from life support and passed away from her injuries.

The victims’ families and other community representatives pleaded with councilmembers to place a new traffic signal at the intersection. The location is considered dangerous by the community because other accidents have occurred at the intersection; other pedestrians have been injured or killed, including other children.

Paul Krekorian, of the Los Angeles City Council; Tamar Galatzan, of the Los Angeles Unified School District; and Captain William D. Sutton, of the Valley Traffic Division, were present at a community gathering on November 5. Each representative promised greater improvements to traffic safety at the scene of the accident. Councilmember Krekorian further stated that he and Galatzan are working together to expedite the construction of a street light at the intersection.

“Whatever it takes, whatever we need, I promise that we will have a street light here as soon as we can,” Krekorian stated at the gathering. “This horrendous accident was a tragedy for Emely’s family, friends and for our entire community and a dramatic wake-up call for all drivers. We must speak with one clear, loud voice in demanding that everyone who gets behind the wheel should slow down and pay attention to the road. Reckless driving, speeding and inattention are making roadways throughout the San Fernando Valley dangerous for pedestrians and cyclists and this cannot be tolerated, especially near parks and schools.”

Angela, who is biologically Emely’s cousin, legally became Emely’s sister after being adopted by Emely’s mother. Emely had attended Roy Romer Middle School, where she had reportedly been an honor student. A candlelight vigil had been held in honor of Emely on November 5, and a memorial of the young girl, consisting of photos, flowers and balloons, has been created for her at the site of the accident.