UNITED STATES−House Minority Leader, Kevin McCarthy, (R-CA) spoke on Fox News and via social media stating that he disagreed with Governor Gavin Newsom’s March 19, order for the state of California to go into quarantine, and “Shelter in Place.” 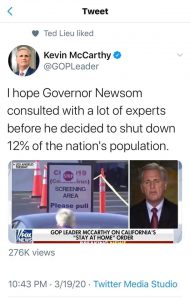 McCarthy went on to say, “Maybe he feels there was a need behind it. We do think there was an ability to do this without shutting down the entire state. I hope he consulted with a lot of experts before he made this decision. California is 12 percent of the nation’s population.  There are essential things that are produced in California. When you think of the pharmaceutical industry and others based in San Francisco when you think of the manufacturing that maybe even makes the items that we need, masks and others.”

Governor Newsom’s announcement indicated that California did not need law enforcement for the order, and stated that, “social pressures” would be placed on those that choose not to follow the guidelines. The goal of the ‘Shelter in Place’ order is to stop the spread of the coronavirus and to prevent all non-essential activity.

Newsom praised President Trump on his response to the Coronavirus saying, “Every single thing he said, he followed through on.”