UNITED STATES—Teenage climate change activist, Greta Thunberg was selected to be the face of a new mural in San Francisco.

Argentine-born artist Andres “Cobre” Petreselli is donating his labor for Thunberb, while oneatmosphere.org, the organization that approached Petreselli regarding the mural is providing the paint. The wall space was donated by the building owner.

The mural is expected to be completed within the next week and will be located at 420 Mason St. in Union Square on the northside of the Native Sons of the Gold West building.

Thunberg, who is 16, is a Nobel Peace Prize nominee for Climate Change.

“You are failing us,” Thunberg told world leaders during a speech at the United Nations summit. “But young people are starting to understand your betrayal. The eyes of all future generations are upon you. And if you choose to fail us, I say we will never forgive you.”

“How dare you. You have stolen my dreams and my childhood with your empty words,” said Thunberg.

One contributor via social media responded to Thunberg’s claims by saying, “Don’t be fooled. This act is bought and paid for by one world, George Soros. MSM is lying to you again.” 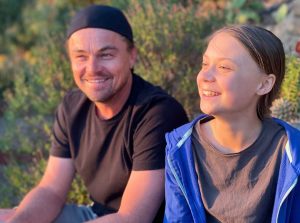 “There are few times in human history where voices are amplified at such pivotal moments and in such transformational ways – but Greta Thunberg has become a leader of our time. History will judge us for what we do today to help guarantee that future generations can enjoy the same livable planet that we have so clearly taken for granted. I hope that Greta’s message is a wake-up call to world leaders everywhere that the time for inaction is over,” said actor Leonardo DiCaprio supporting Thunberg.

“It is because of Greta, and young activists everywhere that I am optimistic about what the future holds. It was an honor to spend time with Greta. She and I have made a commitment to support one another, in hopes of securing a brighter future for our planet. #FridaysforFuture#ClimateS,” said DiCaprio.

Brandon Straka, founder of the Walk Away movement tweeted:

“The leftist geniuses in San Francisco have decided to send a message about climate change by creating a 6-story mural of Greta Thunberg using 700 gallons of aerosol spray paint.”

On November 9, People With Money, reported Thunberg as the highest-paid activist in the world. Between October 2018 and October 2019, she earned over $46 million.