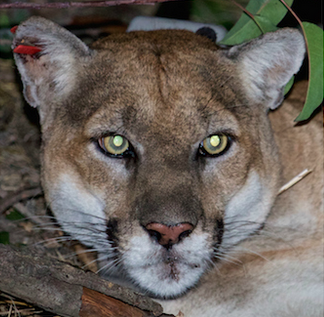 According to a NPS press release, researchers believe that “mange, a parasitic disease of the hair and skin, may have been related to exposure to anticoagulant rodenticides, commonly known as rat poisons.” Although the connection between the two is not completely understood, NPS research has previously found that bobcats ingesting rat poison are much more likely to suffer from severe mange.

The recapture of P-22 is the first time biologists have been able to examine him up close since his capture in April 2014, when he was thinner and suffering from mange.

“He’s gained some weight, his tail has filled out, and he no longer has skin lesions and scabs across his body and face,” said Jeff Sikich, a biologist with Santa Monica Mountains National Recreation Area. “It’s highly likely that he continues to be exposed to rat poison, but for now he seems to be managing.”

P-22, famously appearing in the December 2013 issue of National Geographic Magazine, is currently around 6 years of age, and weighs 123 pounds, which is about 15 pounds heavier than at his last capture, NPS officials stated.

During his April 2014 capture, a blood sample revealed that P-22 tested positive for exposure to two first-generation poisons known as diphacinone and chlorophacinone. “The retail sale of second-generation poisons was banned as of July 1, 2014, but they are still used by licensed applicators, and first-generation versions, like those found in P-22’s blood, remain widely available,” notes the NPS press release.

At the time of P-22’s 2014 capture, NPS researchers treated him with a topical treatment called selamectin. The treatment is used for ectoparasitic diseases, such as mange, fleas, and ticks.

P-22 was first captured in March 2012 by NPS biologists and fitted with a GPS collar after being detected with the Griffith Park Connectivity Study. UCLA and UC Davis conducted genetic testing that revealed P-22 was most likely born in the Santa Monica Mountains and would have had to cross both the 405 and 101 Freeways to make it to Griffith Park, NPS officials said.

The National Park Service has been studying mountain lions throughout the Santa Monica Mountains since 2002, to determine how they survive in an “increasingly fragmented and urbanized environment.”