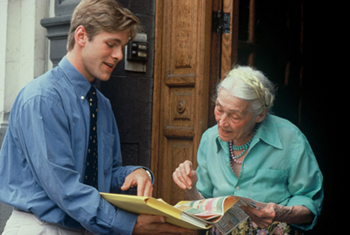 SHERMAN OAKS—Stolen vehicles and illegal door to door sales have become an increasing problem in the area of Sherman Oaks and surrounding neighborhoods, according to the Los Angeles Police Department’s Van Nuys Community Police Station.

In community advisories issued on Tuesday, January 24, police say there has been an increase in grand theft auto in two separate areas of town. Apartment complexes on Vanowen St. between Hazeltine Ave. to Coldwater Canyon in North Hollywood have been frequent targets as thieves have stolen vehicles from these residences. The Van Nuys area within the boundaries of Sepulveda Blvd. to Kester Ave. and north of Sherman Way has also experienced an increase in stolen vehicles.

LAPD officers have been working to help local residents protect themselves from grand theft auto by using a simple, easy to remember slogan: “Lock It, Hide It and Keep It.”  “Lock It” means to lock your vehicle every time you leave it unattended and always lock your valuables in the trunk.  “Hide It” states that if you don’t have a trunk, hide valuables under the seats, in the glove box, or other compartments within the vehicle.  Last but not least, “Keep It” asks that residents exercise personal responsibility as it is the best way to safeguard personal property and to prevent an individual from becoming a victim of theft.Another piece of advice from police is that residents should use an anti-theft steering wheel locking device on their vehicles when possible.

Illegal soliciting of magazines by individual (s) going door-to-door in the Sherman Oaks area have also become a problem for police as they have received complaints from residents.  According to 42.19 of the Los Angeles Municipal Code, it is illegal to sell magazine subscriptions, periodicals or other publications, including sales of any tangible personal property door-to-door for delivery in the City of Los Angeles.