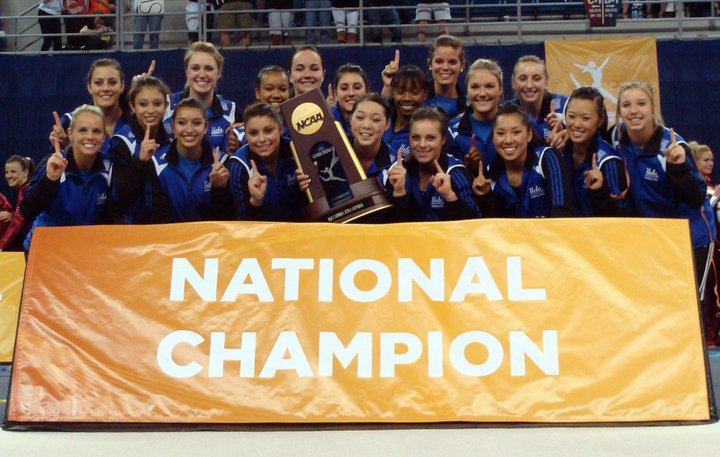 WESTWOOD—After winning the Pac-10 Championship in late March the UCLA Gymnastic team became the number one ranked team in the nation leading all conference champions with a score of 197.35. The Bruins backed up their number one ranking by completing dominating everyone in the Los Angeles Regional—which was technically a home meet for them since it was at Pauley Pavilion—with an unbelievable score of 197.825 to be the top seeded team heading into Nationals.

The victory was the fifth in a row for the Bruins. Since suffering a close loss to Georgia on March 6, the team keep refused to feel the bitter taste of defeat again, and carried that attitude with them all the way into Nationals and eventually the winners circle. There were many good teams at Nationals this year, including Stanford who had beat the Bruins twice this season, but what was especially telling about this group of young women was how easily they won their last five matches. Besides their final home meet on March 14, and the NCAA Preliminaries, the team did not score lower than a 197.35 during their five-game winning streak, and even though they had a season high score of 197.825 at Regionals, the Bruins arguably saved their best performance for the finals.

Unlike other meets the finals are judged by six people instead of the usual three so scores tend to be lower, but this had no effect on the Bruins at all. The team started their day off on vault and immediately took the lead courtesy of a career high 9.95 by redshirt junior Brittani McCullough, a 9.9 by senior Anna Li and a 9.925 from sophomore sensation Vanessa Zamaripa. In their next rotation the Bruins continued their solid performance on the uneven bars. The first four Bruins earned respectable score of 9.8 or 9.85, while Li and Zamaripa finished the rotation with successive 9.9’s to help their Bruins maintain their lead.

The next rotation had the Bruins face their nemesis. All season the Bruins seemed to struggle when it came to beam, but for the past four meets the Bruins had more than exceptional on beam to get themselves to the finals, so it came as no surprise when the Bruins turned in another great effort to keep their stranglehold on their lead. Senior Anna Li lead off with nice score of 9.85 and the rest of the team followed suit by also obtaining scores of 9.85 or better, highlighted by two 9.9’s from Zamaripa and Elyse Hopfner-Hibbs.

After the team got done with beam only one event stood in their way of National Championship. Floor had been the strength of the team all year and needing only a collective score of 49.1 to pass up the Sooners of Oklahoma, it was almost a given the Bruins were going to be the victors, but it still had to be proven on the floor. The Bruins did more than prove it; they notched a score of 49.55 to solidify their place as National Champions, their first since 2004. Tauny Frattone lead things off with a career high 9.875 and everything just got better from there. Niki Tom put in a great effort and scored a 9.775, but the rest of the team simply took off. Li and Zamaripa both hit 9.9’s and McCullough and Hopfner-Hibbs finished the meet off with scores of 9.925 and 9.95 to secure their title. The victory was something special for the whole team, but no one appreciated it more than senior Anna Li. Growing up in a family of accomplished gymnasts, Li wanted nothing more than to win a national championship at UCLA and it was great to end her college career on such a high note.

“Winning nationals this year was just amazing. It was the whole journey that I had been through the past four years leading up to this that makes this so meaningful to me. The rebuilding of the team the last four years and believing and having a vision of what it would be like-actually came true. I’ve never experienced something that was more exciting than winning this national championship. Not only all the hard work with the team, but just changing my mentality this year. I’ve also never been a part of a team who are such amazing people. Being able to work every day with my teammates and coaches who have so much integrity both inside the gym, and outside of the gym is something I’m very thankful for. Finishing up my college career with a championship ring is definitely just icing on the cake!” said senior gymnast Anna Li.

Winning the National Championship wasn’t the end for the Bruins. The very next day in the individual finals Brittani McCullough had another astonishing performance on floor to win her first National Title and Vanessa Zamarripa won her first title on vault to provide a magical finish to what is sure to be a memorable season in gymnastic history at UCLA.