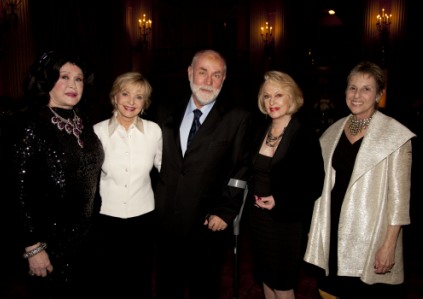 HOLLYWOOD—Paul Williams took center stage in the Crystal Ballroom of the Millennium Biltmore Hotel on Sunday, January 30, to praise the career of friend and colleague, Hal David. Williams began performing snippets of Hal’s hits like “Raindrops Keep Fallin’ On My Head,” “I’ll Never Fall In Love Again,” “Close To You,” “Walk On By” and many more. When asked about his friend Hal’s many amazing hits, William declared, “If we tried to cover all of his work, we would have to continue this tribute tomorrow night.”

An honorary committee that consisted of entertainment industry elite such as Charles Fox, Burt Bacharach, Michele Lee, Carl Reiner and many more made the Music Center and Club 100’s annual “Magic Moments” gala the place to be in Los Angeles that night. Though many were on hand to praise Mr. David and his career, the patrons seemed to revolve around two primary tables. That of Mr. David himself, which included the evenings host, Paul Williams and Sally Kellerman (who would later treat the audience to a selection of Mr. David’s songs from the stage) and table 10, hosted by noted cabaret singer Barbra Van Orden, which included Tippi Hedren, Florence Henderson, Robert David Hall and Gary Austin.

“I had to be here tonight, if only to personally express my appreciation to Mr. David for his music and how much it has meant to me,” said Tippi Hedren. Florence Henderson added, “I thought I had a good idea about Hal’s body of work when I arrived tonight, but as the evening progressed, I caught myself saying, ”˜He wrote that ”¦ and that as well?’ It’s amazing to think how many great pieces of music he has given us.”

Club 100 has been a support organization for the Music Center’s Art Education and family programming since 1976. The organization is comprised of dynamic professional and civic minded women, whose goals are to build awareness of the importance of arts education in public schools, fundraise for the Music Center’s Artists Teacher Partnership (ATP) program, and support the annual BRAVO Awards.