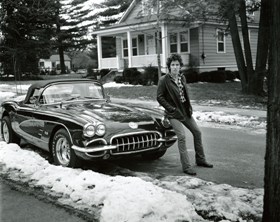 HOLLYWOOD—“The Promise: The Making of Darkness On The Edge Of Town” goes into the studio with rock icon Bruce Springsteen and the E Street Band for the recording of their fourth album. Grammy and Emmy-winning filmmaker Thom Zimny, has collaborated with Springsteen on this documentary, gaining access to never before seen footage shot from 1976 to 1978, capturing home rehearsals and recording sessions that reveal Springsteen’s creative process at work.

Springsteen is known for his soulful and intense style of music that is regularly considered patriotic and truly American.

Seen on HBO last November in “The 25th Anniversary Rock and Roll Hall of Fame Concert,” Bruce Springsteen’s other HBO appearances include 2009’s “We Are One: The Obama Inaugural Celebration at the Lincoln Memorial” and the 2001 concert special “Bruce Springsteen and the E Street Band.” This documentary is not only exciting but also groundbreaking. Whatever the singer is involved with creatively is always considered edgy, but this latest project has me offering him a bit more respect as an artist than I’d previously given him credit for. After this airs, viewers could (and possibly should) consider Springsteen a musical genius.