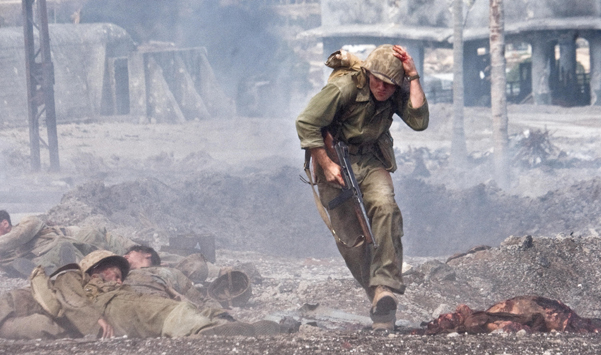 HOLLYWOOD —As the series went into episode eight of a 10-part miniseries, increasingly frustrated by his role campaigning for war bonds, Basilone (Jon Seda) convinced the marines to allow him to train troops headed for combat. Basilone as Seda played the scenes with emotional attachment with the other guys. This is one of the actor’s greatest attributes. Possibly because his character is so likable, but also it’s evident that the actor is very intent in playing the scenes in the show with a lot of reality. This is how many of our heroes are remembered during WWII. Also in the episode, transferred to Camp Pendleton, Basilone also enjoyed a whirlwind romance with an initially reluctant female Marine, Lena Riggi (Annie Parisse). However, the couple knew they are living on borrowed time, as Basilone was soon to take part in the Marine landing on Iwo Jima.
The chemistry between Parisse and Seda was very romantic, but the actors played it brilliantly. The one thing that is great about all of the romantic scenes in this miniseries is that it’s acted and directed like the old movies of the 40s and 50s. Spielberg and Hanks realize the era this is based on and they decided less is the best policy when it comes to a story like this. I admire and respect their decision to be respectful of the audience that is growing each week, but many young people are watching such a real-life story for the first time. The military action is very intense, but it has to be to tell the stories of the greatest generation and what they endured to battle the evil of the former Empire of Japan. This episode of “The Pacific” was the best so far this season, but on Sunday night expect episode nine to be even better. This episode was written by Robert Schenkkan and Michelle Ashford, and also directed by David Nutter and Jeremy Podeswa.