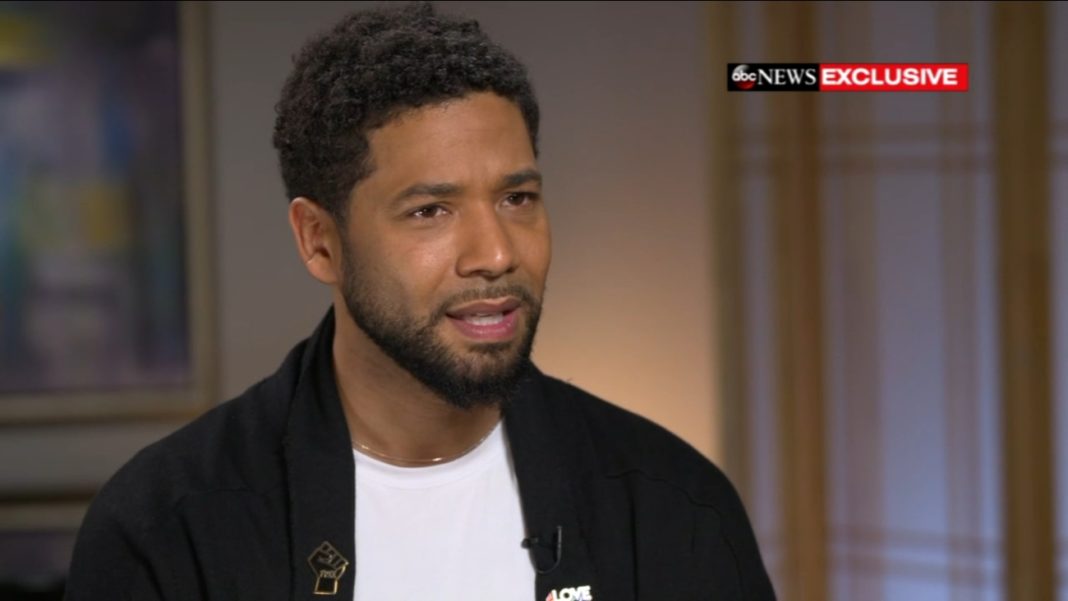 CHICAGO, IL—Jussie Smollett’s friend contacted police approximately 2:40 a.m. on January 29, 2019. The police arrived at the luxury high rise apartment of Smollett’s friend. They were asked to turn off their body cameras before entering the dwelling.

Smollett reported to the police that approximately 40 minutes before they called 911, two individuals wearing ski masks physically attacked him, while calling him racist and homophobic slurs, then wrapped a thin rope in the shape of a noose around Smollett’s neck.

Smollett was allegedly walking back from a Subway Restaurant on the 300 block of East North Water Street. Police reported minor injuries. Smollett told police he did not know the race of the alleged attackers because they were fully clothed and their faces were covered.

The week before, Smollett had allegedly received a letter threatening him with similar threats, a noose, MAGA written at the top of the envelope. Fox Network offered Smollett personal security, which he declined.

The temperature in the vicinity was -11 degrees at 2 a.m.

Smollett drove himself to the Emergency Room where he was Face-timing a friend, Lee Daniels, who posted a screen shot of the call on social media with a melodramatic emotional plea, showing a minor scratch and no other bruising or injuries on Smollett’s face. He later deleted it, but it still continued to circulate.

The hospital examined Smollett and released him with minor injuries, a small surface scratch on his face.

The next morning TMZ reported, Jussie Smollett was hospitalized after being “brutally attacked” by two white men wearing MAGA hats yelling racial and homophobic slurs, was doused in some type of unknown chemical. The suspects yelled, “This is MAGA Country.” TMZ reported, Smollett was currently recovering from a broken rib, chemical burns and other injuries from the attack.

Chicago Police Department (CPD) did not release details to the media about the “actor” from Empire to protect his privacy so it was obvious Smollett had released his identity to TMZ. Smollett reported to TMZ vastly different details than what was reported to the police after the incident, so they questioned Smollett, who changed his story.

Smollett then told CPD that the attackers were white and yelled “This is MAGA Country.”

News continued to circulate. The story continued to change. CPD put 12 detectives on the case to go through hundreds of hours of video tape to find anything related to the attack.

Video footage shows Smollett at Subway Restaurant, walking down the street at approximately 2 a.m., then he is not on camera for approximately 50 seconds and he reappears with a thin rope around his neck.

Jussie Smollett is not a well known actor, in fact his IMDB rating was just about 10,000 on the popularity scale at the time of the attack. Within a few days it jumped up to 102.

The week before Jussie Smollett was scheduled to perform at the Troubadour in West Hollywood, ticket sales were not happening. The day before this alleged attack, Jussie was posting on social media, “Who’s gotten their tickets already?” on January 28th at 10:48 a.m., less than 16 hours before this alleged hate crime.

If you look closer at Smollett’s digital footprint, you will see that he can’t seem to control his distaste for the president. Just 2 weeks prior to this he made hostile epithets and profanity to President Trump. He appears to use MAGA and 45 interchangeably while attacking anyone who supports the president. On one post, calling anyone that supports President Trump a clown and is to be blamed.

An insider reported that the set of “Empire” is racially charged. They talk as if it is a known assumption that blacks are victims, police are racist, Trump is racist, etc. This isn’t surprising giving the facts that Taraji Henson, Smollett’s co-star publicly attacked and accused a Glendale police officer of racially profiling her 20 year-old son. She publicly labeled the officer as a racist and announced that she would not allow her son to attend USC because of it, even though USC is no where close to Glendale, CA.

It was not until Glendale Police Department (GPD) released the body camera video did they have proof that not only was her son violating the law by running a stop sign, but he also had marijuana (which was illegal at the time if he hadn’t had a license). He told the police officer he had medical license but didn’t have it on him. The police officer let him go on a moving violation as a favor. Taraji Henson offered a public apology, but press didn’t report it as much as they reported her false accusations.

So when the details came out, this seemed to be more like a script from “Empire” than an actual crime. Either that or we are getting punk’d. There is no way this was an actual attack for many reasons. The story is easily pieced together to smell like rubbish.

From the GMA interview, Smollett said:

It feels like if I had said it was a Muslim, or a Mexican, or someone black, I feel like the doubters would have supported me much more. A lot more. And that says a lot about the place that we are in our country right now….For me, the main thing was the idea that I somehow switched up my story, you know? And that somehow maybe I added a little extra trinket, you know, of the MAGA thing. I didn’t need to add anything like that. They called me a f*****, they called me a n*****. There’s no which way you cut it. I don’t need some MAGA hat as the cherry on top of some racist sundae.

The Smollett story is very important. It is teaching us that what people say is not always true. People are trying to control others based on lies to fit into their political agenda.

In the mean time it is splitting families, friends, classmates, co-workers, news reporters, media etc. It is drawing up hate.

It is an attack upon President Trump who is working for free, giving up his life, his successes and not even taking a salary to fix our country which was spiraling downhill quickly. He has received unfair media filling the air waves with outright lies, misstatements, hate and disgust as well as unfair educators pushing their socialist agenda upon young unsuspecting minds. The goal for some is to get control over the country. For the country to cover the corrrupt crimes in Washington. Had Hillary won, no one would have uncovered the corrupt interference in our elections as deep as the FBI.

Jussie Smollett is simply a casualty of war. He has heard so much negativity from his world of media, his friends, the fake news and he is a victim of these lies, creating imaginary issues that are just not there. President Obama pushed for racial divide. The out of control suspects who got shot for not complying with police were soon made into victims. People assume these stories are accurate because their loved and respected ones were buying it up too. They expect things coming off on the local news is truthful. they don’t look at the facts themselves, they just blindly fall for the hate.

Jussie is a hurting victim and needs consoling. However, not for a brutal attack that never took place.

It sounds like he maybe slipped on some ice, scratched his face and then came up with an elaborate scheme to up his music sales. He decided to throw everything in to help his agenda, MAGA supporters, white men, racism, homophobia, etc. He put everything in to garner emotional attention from the world. Meanwhile, it gave him the ultimate attention from the world that he has been craving his entire life. It worked.