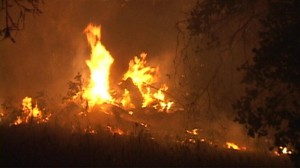 STUDIO CITY — On May 22, 78 firefighters battled a hillside residential fire in Studio City. The flames were contained in less than 40 minutes with no reported injuries, according to the Los Angeles Fire Department.

Arriving firefighters found the one-story hillside single family home fully affected by the flames. Light northern winds along with the potential for flying embers to set volatile vegetation aflame required the need for three L.A.F.D. helicopters to be deployed to the area for command support and aerial water dropping. Ground-based firefighters surrounded the flaming 2,051 square-foot home, preventing it from spreading to a nearby 833 square-foot building. The firefighters extinguished the fire in about 36 minutes.

A man who lived in the residence had reportedly been sleeping alone inside of his flaming home when he was awakened by the sound of breaking glass. The homeowner managed to escape without injury before the firefighters arrived. It is unclear if smoke alarms were present or functioning inside the 66-year-old structure; however, a residential fire sprinkler system had not been implemented into the home.

L.A.F.D. reports that the homeowner’s cooperation with L.A.F.D. brush clearance regulations played a key role in preventing the greater alarm structure fire from spreading to other property. The cause of the fire is unknown as of press time, however a representative with L.A.F.D. told Canyon News that the incident is still being “actively investigated.”