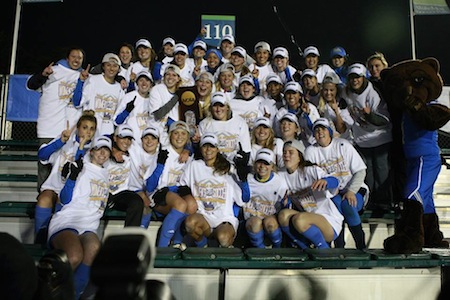 On December 8, the women’s soccer team defeated the Florida State Seminoles 1-0 in overtime to be crowned College Cup champions in North Carolina. “We just made history, we just got the 110th national championship for UCLA and it’s the best feeling ever—I can’t even describe it,” an overjoyed UCLA Midfielder, Jenna Richmond, said postgame.

The sole goal of the championship game was scored in the 97th minute by sophomore Kodi Lavrusky who was assisted by a through ball kicked within the 16-box by junior Megan Oyster.

“I just took my chances with dribbling it up, they left the space open and I just went for it,” UCLA defender Oyster said after the game, “Kodi made an amazing run, her timing was just beyond perfect.”

Many of the teammates were at a loss of words for their historic win. Coach Cromwell described her reaction, “I turned and looked at the crowd and watched them going crazy…and I was just a little bit like, ‘Wow, this just happened, its real life,’ and to see the girls crying and screaming and laughing, it’s just surreal.”

The postgame video featured on the team’s website shows the soccer players celebrating in the locker room, triumphantly singing “We are the Champions” with their arms around one another.

According to UCLA Athletics, the women’s soccer team “defeated three No. 1 seeds en route to the championship,” concluding their season with a 22-1-3 record.