SANTA MONICA—On Thursday, August 15, the Los Angeles County District Attorney’s Office announced that Michael Gargiulo, 43, a convicted serial killer nicknamed the “Hollywood Ripper,” was found guilty for the brutal slayings of two women and for trying to kill another woman over a seven-year period.

After deliberating for more than three days, jurors finally found Gargiulo guilty of two counts of first-degree murder with the special circumstance allegations of multiple murders, which might make him eligible for the death penalty.

He was also convicted of one count of attempted murder and attempted escape. The sentencing phase of the trial is expected to begin August 20, the Los Angeles County District Attorney’s Office announced in press release.

Gargiulo’s crimes started in 1993, when he was charged in the slaying of Tricia Pacaccio, 18, in the Chicago region. In this trial, prosecutors were able to present details about the murder as supporting evidence for Pacaccio’s murder. 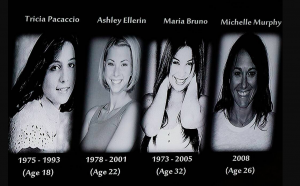 In 2001, Gargiulo struck again by breaking into the Hollywood Hills home of 22-year-old Ashley Ellerin, who was dating Ashton Kutcher at the time, stabbing her to death. Kutcher testified at trial back in May 2019 noting that he had made plans with Ellerin the night she was killed, February 21, 2001.

Police reports indicated that Kutcher arrived between 10:30 p.m., and 10:45 p.m., after several unanswered calls to his date. Upon arriving to her Hollywood Hills home she never opened the door. He peered through the window where he saw what he thought was red wine on the carpet. The following day Ellerin was found dead by her roommate outside her bathroom. Gargiulo attacked her from behind as she stepped out of the shower, allegedly stabbing her 47 times before fleeing the scene.

Four years later, in 2005, Gargiulio murdered and mutilated his 32-year-old neighbor Maria Bruno while she was asleep, in her El Monte home.

The defendant attempted his last attack on another neighbor three years later, in 2008. Gargiulo attacked Michelle Murphy, 26, in her Santa Monica home where he stabbed her. She fought off Gargiulo during the attack and was cut during the struggle. DNA evidence and details of that attack connected him to all three crimes, prosecutors said.

Gargiulo was arrested in June 2008 by officers from the Santa Monica Police Department and charged with the murder of Ashley Ellerin and Maria Bruno.