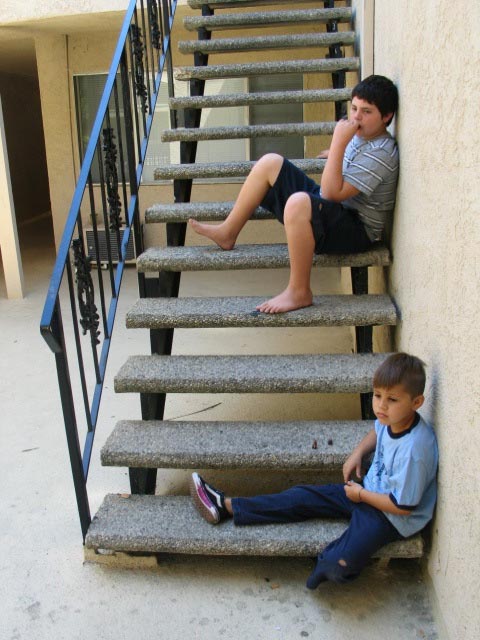 HOLLYWOOD—One in 50 children experiences homelessness in the U.S. each year. In Orange County, Calif., in some of America’s wealthiest zip codes, some kids of the working poor live with their families in single motel rooms, attending a special school for transient children and playing in concrete parking lots in the shadow of the world’s most famous amusement park. The documentary debuted on Monday, July 26. The timely HBO documentary “Homeless: The Motel Kids Of Orange County” reveals the devastating impact of hard times on children of the working poor. Alexandra Pelosi (HBO’s EmmyÂ®-winning “Journeys with George”) directed the program.

Acclaimed, award-winning journalist, producer, and filmmaker Alexandra Pelosi ”“ who has built a reputation with playful and provocative HBO documentaries about President George Bush, Ted Haggard and the American electorate”“shifts her focus to a serious social issue that has been exacerbated by the recent economic downturn: homelessness among children of the working poor.

“Homeless: The Motel Kids Of Orange County” explores the world of children who reside in discounted motels within walking distance of Disneyland, living in limbo as their families struggle to survive in one of the wealthiest regions of America. The parents of motel kids are often hard workers who don’t earn enough to own or rent homes. As a result, they continue to live week-to-week in motels, hoping against hope for an opportunity that might allow them to move to the O.C.

The toll of this lifestyle on their children is severe. Though the community tries to provide adequate education and food, the day-to-day lives of motel kids are often a numbing exercise in frustrating constraints and ever-diminishing expectations.

The hardcore series makes the viewer think about what is actually important in America. We also are faced with the daily political arguments that seem to have been going on for decades, while we rarely ask what all of this is doing to our nation’s children. The brightest amongst us, the hope for the future, our nation’s youth often find themselves in the way of progress and not part of it.

If you missed the series debut last month, it will encore on HBO on Sunday, August 8, and on HBO2 on Monday, August 9.

“Homeless: The Motel Kids Of Orange County” is the sixth HBO documentary by Alexandra Pelosi, who made the 2002’s EmmyÂ® winner “Journeys with George” and 2004’s “Diary of a Political Tourist.” She subsequently spotlighted evangelical Christians in “Friends of God: A Road Trip with Alexandra Pelosi” and “The Trials of Ted Haggard,” followed by last year’s “Right America: Feeling Wronged ”“Some Voices from the Campaign Trail.”