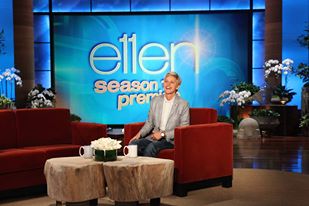 HOLLYWOOD—Oscar producers have returned to the well of previous hosts and selected Ellen DeGeneres to host the Academy Awards on March 2, 2014, on the ABC Television Network. After mixed reviews of Seth MacFarlane’s performance as the host of the Academy Awards this year, it was a no-brainer to go with Ellen.  “There are few stars today who have Ellen’s gift for comedy, with her great warmth and humanity,” producers Craig Zadan and Neil Meron say. “She is beloved everywhere and we expect that the audience at the Dolby Theatre, and in homes around the globe, will be as excited by this news as we are.”

Just ask Sarah Hoidahl, what she thought of Ellen DeGeneres?  Sarah was working at a restaurant in Concord, New Hampshire, when two National Guard soldiers sat in her section for a meal, Fox News reported. The 21-year-old single mother, who apparently has friends in the military, heard them discussing the government shutdown a few weeks ago and mentioned they were not getting paid. After they finished their lunch, instead of delivering the two women the bill, she wrote a note. It read: “Thanks to the government shutdown the people like you that protect this country are not getting paid, however, I still am. Lunch is on me thank you for serving ladies! Have a good day!”  The bill cost her $27.75. Leave it to Ellen DeGeneres to step right up to the plate. Ellen gave the waitress the $27 dollars back along with a check for $10,000 and a 50-inch television. Ellen learned about the act of kindness after the New Hampshire National Guard posted a picture on its Facebook page. She then invited the waitress on to her show. A very emotional Ms. Hoidahl buried her face in her hands and thanked Ellen as the talk show host repeated: “You’re a good person.”

Ellen has come a long way from New Orleans as an emcee at a local comedy club in her hometown. She’s been very successful in all she does including her feature film work. She scored unprecedented popular and critical response to her character, Dory, the fish with extreme short-term memory, in the blockbuster, Pixar animated feature “Finding Nemo.” DeGeneres recently announced the highly anticipated sequel to “Finding Nemo,” “Finding Dory,” which is currently scheduled to be released in November 2015.

It’s another hosting stint for Tiny Fey and Amy Poehler, whose Golden Globes stint back in January was one of the most widely praised in recent years. They will return to host in 2014 and 2015, the Hollywood Foreign Press Association announced last week. The both followed on the heels of Ricky Gervais, whose sometime funny, yet mean-spirited jabs reportedly upset many celebrities. The show, which honors the best in television and film, airs on January 12, 2014 on NBC. The 2013 show hit a six-year high, drawing in 19.7 million viewers.

In Hollywood, it’s all about the numbers game. The numbers game didn’t go well for “The Fifth Estate.” It made only $1.7 million in ticket sales in its first weekend, despite opening at 1,769 cinemas. Benedict Cumberbatch’s stars as WikiLeaks founder Julian Assange. The movie has made the worst U.S. box office debut of any major film this year. The film was co-produced by Steven Spielberg’s Dreamworks studio. It received mixed reviews and has been heavily criticized by Assange himself. Assange is still wanted for questioning in Sweden and is still holed up at the Ecuadorian embassy in London, where is seeking asylum. Disney, the distributor of the film, said it was “certainly disappointed” by the film’s poor showing and was looking into why it performed so badly. Despite the mixed reviews of the film Cumberbatch, is considered one of the Hollywood’s rising stars. He enjoyed box-office success playing the bad guy in the latest “Star Trek” movie.

Rose’s Scoop: Kanye West gave Kim Kardashian for her birthday, a 15-carat sparkler. Yes, he popped the question on her birthday. West will be her third husband; prior to Humphries, she was married to music producer Damon Thomas for three years after eloping at age 19. Kardashian gave birth to their daughter, North West, in June.