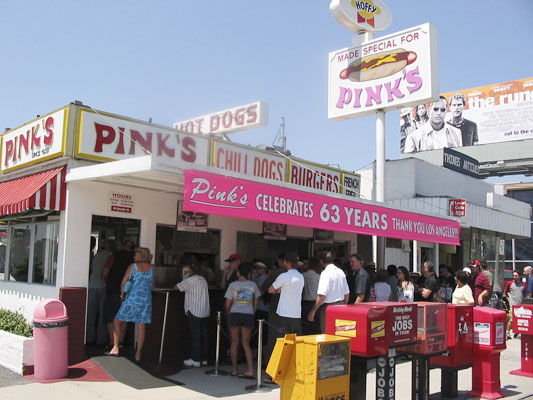 LOS ANGELES—In the wee hours of Monday, April 5, an individual broke into and robbed Pink’s Hot Dogs, a well-known fast food spot in Los Angeles. LAPD officials are on the hunt for the suspect.

According to the LAPD, the robbery took place at around 3 a.m. The only witnesses were two Pink’s employees who were locking up the restaurant and were surprised by a single man. The man had been lying in wait for the chance to surprise the employees in a hold-up. The suspect is believed to be African American, around 30-years-old, 5 feet, 8 inches tall and weighing about 170 pounds and may be, or once was, in possession of a single silver gun. It appears that the man expected the employees to know the combination to the restaurant’s backroom safe. When neither of the employees professed to know the combination, the suspect stole $20 from one of the employees and took off with the tip jar.

Pink’s Hot Dogs has been in Los Angeles for just over seven decades, having been started by Paul Pink in 1939. First started as a mobile pushcart, Pink eventually purchased a cozy building in 1946, the same building locals know and love today. “The Depression was on and money was scarce,” the Pink’s biography explains. “Pink’s chili dogs [came] complete with a large warm bun, oversized hot dog, mustard, onions and thick chili… His hot dog wagon was located in ‘the country,’ rolling hills of weeds and open spaces. That was the corner of La Brea and Melrose sixty-five years ago!”

Currently located at 709 N. La Brea Ave., the business is known for its great popularity with natives and regular long lines of hungry patrons. Back in the beginning of Pink’s, hot dogs were sold for 10 cents.

The LAPD urges any individual with any knowledge at all about this case to call Wilshire Area Robbery Detectives at 213-473-0154 during business hours, or on weekends or late hours, to call 877-LAPD-24-7. Tips may also be shared online on the “webtips” link through LAPDOnline.org. Anonymous tipsters can also text Crimestoppers at 274637 or call Crimestoppers at 1-800-222-8477. The LAPD advises texters to begin their message with the four letters “LAPD.”