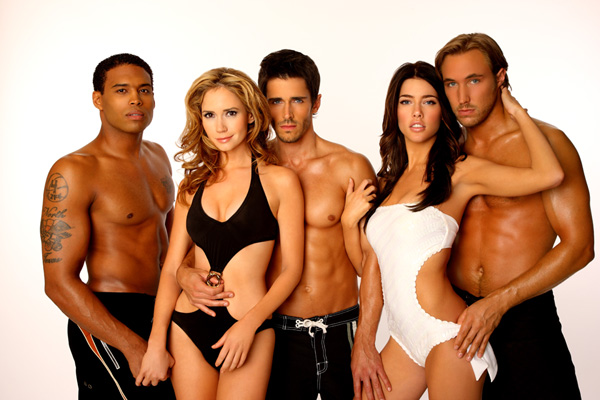 HOLLYWOOD—This is a town that is known for creating big stars. Those who last are considered legends and “The Bold and the Beautiful” is known for great acting, exceptional writing and storylines that are over-the-top and exciting, which is why the series is so successful across the globe. Super scribe Bradley P. Bell is never at rest. He has some of the most exciting young thespians in Hollywood and he takes great pride in giving them all exciting storylines and opportunities to shine. Actors on other series both daytime and primetime envy the rich and delicious stories Brad tells with aplomb.

Shining very bright on his series are Ashley Jones, an actress who is not only beautiful, but extremely talented. Jones made an impression with “True Blood” fans last season when she did double duty and appeared simultaneously on “B&B” and “TB” winning hearts and souls of TV viewers all over the place. Then there is the actor on “B&B” best known as a triple threat. Gene Kelly coined that phrase to describe a magnificent actor who can also sing and dance. That’s Kyle Lowder through and through. Texas Battle is a young man who made such a strong impression on the small screen when Bell hired him to portray Marcus, the long lost son of sexy Logan sister Donna.

Brandon Beemer came on-screen and fans were unaware if his character Owen would be a good guy or bad. Lucky for us, he’s neither. He portrays his character’s complexities with ease. When it came to Jacqueline MacInnes Wood, I have to admit she was a sleeper surprise. I was not sure where this actress would take the character of Steffy, her iconic grandmother’s [Stephanie Forrester’s] namesake. The past few months I have been pleasantly surprised that I have grown to love Steffy as much as I do her grandmother. That’s saying a lot.

Brandon Beemer, Kyle Lowder and Texas Battle are handsome hunks that heat up daytime television. Though they are superior actors with great star-appeal. ABC is constantly trying to create hype about their “Grey’s Anatomy” hunks Dr. McDreamy and Dr. McSteamy. These three who can all be called an Adonis in their own right are much better actors than their primetime counterparts, with Lowder offering a performance not seen since 20th Century Fox’s Henry Fonda prevailed in this town. His work only gets better each day.

MaciInnes and Jones are gorgeous ladies who have helped make “B&B” the most successful and most watched show on the planet. Ashley Jones has the acting chops and sensual appeal of the late Ava Gardner and will continue lighting the fire of every male viewer of “B&B.” None of these great stars would be where they are if it were not for the daytime Emmy-winning producer and head writer Bradley P. Bell, who took his father’s dream series to new heights.

“B&B” airs weekdays on CBS. With the cold winter storms all over the nation giving people more time at home to watch television. My suggestion is turn on “B&B” and expect the new generation of stars to take your breath away.