UNITED STATES—A Michigan hotel retracted a discount rate offered to groups once it was discovered the individuals staying were supporters of President Donald Trump. 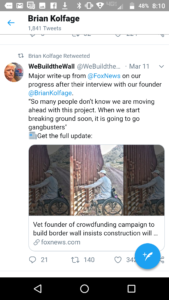 According to news reports, the US military veteran and triple amputee, Brian Kolfage, Purple heart recipient, Steve Bannon, and Sheriff Clarke are scheduled to speak at an event in Detroit, to raise funds for the effort founded by Kolfage, “We the People will Build the Wall.”

It was recommended to the group traveling with the, ”We the People will Build the Wall” campaign to stay at, The Detroit Foundation Hotel as it was near the Cobo Center where their fundraising effort would take place.

Within the hour, the clerk informed Kolfage they would not be honoring their previous agreement. The response is being called, “MAGAphobia,” which are individuals who are against those supporting President Donald Trump.

Canyon News reached out to both Brian Kolfage and the Foundation Hotel. A representative from the “We Build the Wall” campaign informed Canyon News that Kolfage was unavailable because he was travelling on the road between Michigan and Ohio. The Foundation Hotel did issue an apology for the initial response from hotel staff.

“The Foundation Hotel apologizes that a position that does not reflect our policy was in any way represented to a potential guest and that an unauthorized decision to rescind a standing offer [that] was made. We have taken the necessary steps to resolve the situation. The discount group offer for the party in question is extended. The Foundation Hotel does not discriminate against guests based on race, creed, color, ethnicity, national origin, religion, political affiliation, sex, sexual orientation, gender expression, age, physical or mental ability, veteran status, and marital status. The hotel was built on the very premises of being inclusive and serving the community in all ways it can.”