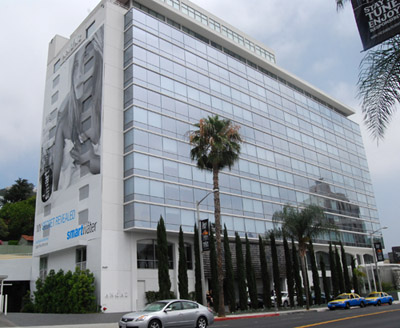 WEST HOLLYWOOD—On Thursday, July 22, a group of bellhops, housekeepers and bartenders gathered in front of the Hyatt Hotel on Sunset Boulevard and held a peaceful protest against job cuts, excessive injury rates and elimination of health care benefits in the Hyatt hotel chain. The protest resulted with the shutting down of Sunset Boulevard, causing major traffic backup on the street and surrounding roadways.

Among the Hyatt workers were hundreds of unionized workers, part of the UNITE-HERE Local 11. They were protesting in the 8400 block of Sunset Boulevard near Hyatt’s Andaz West Hollywood Hotel.

According to uprisingradio.org, “In June, members of UNITE-HERE Local 2 in San Francisco walked off their jobs at the Hyatt Regency for three days. This nationally coordinated action is the latest in an on-going boycott and protest of the Hyatt group of hotels. Since the Hyatt hotel group went public last year, share prices have risen 50 percent. One billionaire Chicago-based family, the Pritzkers, have raked in close to a billion dollars from the hotel chain, which is one of the nation’s most lucrative. But as profits have been increasing, hotel workers have been laid off. The resulting increase in work load has resulted in the Hyatt having the highest rate of injury among housekeepers last year.”

Los Angeles County Sheriff’s spokesman Steve Whitmore said the 63 workers who were arrested were also cited and released by Thursday evening on misdemeanor charges of failing to disperse.

Among the 63 arrested were Rachel Timoner, a rabbi and a professor at the American Jewish University; Maria Elena Durazo, the Executive Secretary General of the LA County Federation; Uprising correspondent Chris Bennett; and Margarita Ramos, who works as a housekeeper at the Hyatt Regency Century Plaza hotel, among many others.