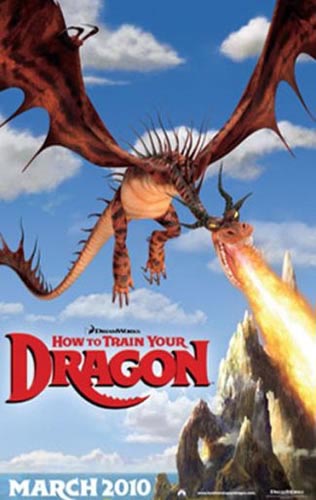 HOLLYWOOD —“How To Train Your Dragon” sounds like a children’s book, and it is. It in also a children’s film by Dean DeBlois and Chris Sanders, who both direct the animation film. The movie’s stars use their voices to tell a fascinating story that parents may find as fun and as fascinating as their children will. The plot involves a hapless young Viking who aspires to hunt dragons and becomes the unlikely owner of a young dragon himself. He learns there may be more to the creatures than he assumed.

Children may learn from this film that you can’t always have everything you want. Maybe you sometimes need the help of others in order to achieve things. Gerard Butler currently has “The Bounty Hunter” out in theaters and although it hasn’t been a real hit. This film may be one for him to add to his resume. The handsome star is the voice of Stoick and the film also has “Ugly Betty” star America Ferrera as Astrid, as well as Jay Baruchel as Hiccup.

Cressida Cowell’s novel of the same name is put on the 3D Imax screen and children will love it. The world of make-believe is often told best on the big screen, as “Alice in Wonderland” proved just recently. The characters venture into the wonderful make-believe world of Vikings while coming in contact with dragons and other make fantasy creatures that movie goers imaginations will run away with while watching this picture. The beginning was not very enticing; however, by the middle of the film I was hooked. The ending is a nice one but the payoff wasn’t really there.

Visually it’s spectacular as most animated 3D films are. If you are not busy this weekend, and the kids want to go out, it’s a nice treat.
“How To Train Your Dragon” gets Three of Five Stars.